When planning a trip from Bangkok to a floating market, most online sources will recommend either Damneon Saduak, the biggest, most popular, most geared towards western tourists; or Amphawa, the smaller, quieter, more popular with Thais. Some will say Amphawa is more authentic and less touristy, but the truth is none of the floating markets in Thailand are “authentic.” None still sell stuff from boats because it’s the easiest way to transport goods. They sell stuff from boats because tourists like it.

Since we didn’t want to go on a packaged tour or be overcharged, we took a minivan bus from Victory Monument to Amphawa. Once we figured out, with the help of some kind locals, which bus station to go to (there are stations on every corner), it was super easy to get to Amphawa. We paid 80 baht (just over 2 USD) per person. We were dropped off in Mae Khlong where we were directed to a songtheow (public taxi/truck) that would take us to the floating market. In Amphawa, a tuk tuk driver took us to our guesthouse where we dropped off our bags before heading out to the market.

Amphawa is known for being more of an afternoon/evening market. When we arrived that Friday afternoon, we found a land market with food and goods set up on both sides of the main bridge and shops on the boardwalk lining the canal. 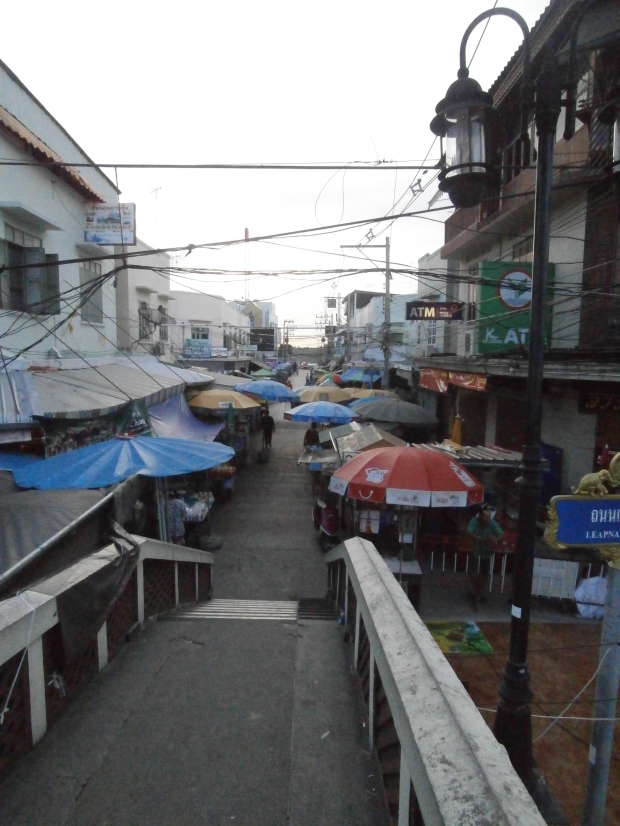 My favorite part of the land market was the cats who thought they were for sale.

In the water were several sets of boats in which women were preparing seafood. Each set was moored next to a restaurant of sorts with tables and benches facing the canal on terraced steps.

We, of course, wanted to partake of this seafood, so we hovered until we found an open table. We ordered squid, mantis prawns, and cockles. The squid and mantis prawn were OK, but the cockles we amazing. 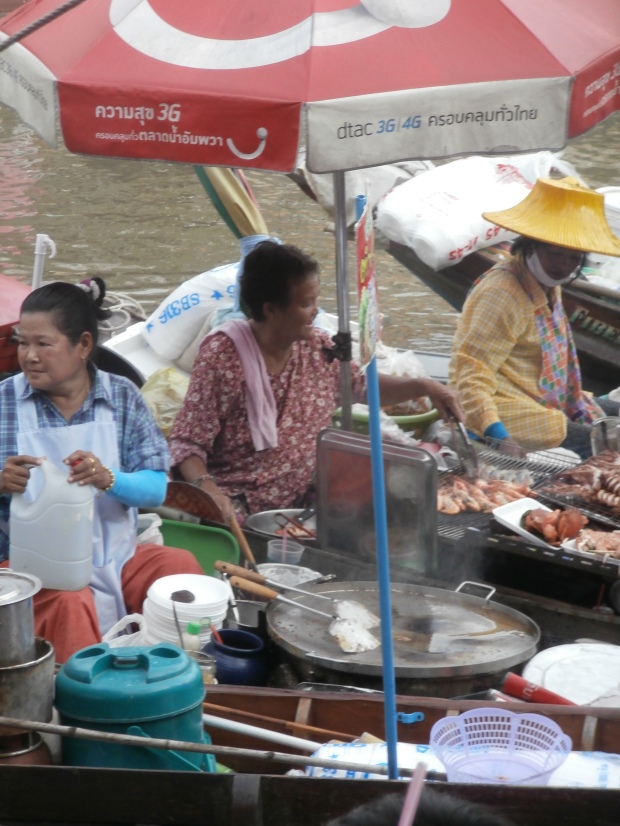 We wandered around the market until dusk when we made our way to the boats that would take us to see Amphawa’s famous insects: fireflies!
Growing up in Ohio, I saw fireflies every summer, but my kids haven’t lived places with fireflies, so we were excited. The hour long boat ride cost 60 baht per person.

We made our way out of the canal and into the river. As darkness fell, we began to see sparks of light on certain trees. Once the sky was completely black, these trees, which are apparently a favorite of fireflies, were covered in glowing lights. It was hard to believe the spectacle was caused by living creatures and not electric Christmas lights.

The next day Rand and I got up early to see the monks collecting alms. Some monks walked along the canal and others paddled in boats.

The locals gathered in front of their homes and climbed the ladder down to the water to present their offering to the paddling monks.

After we gathered the girls from the guesthouse, we chartered a boat (600 baht) to take us to Wat Bang Kung, an ancient wat completely enclosed in banyan tree roots. The boat took the same path out of the canal and down the river as the firefly boat. We were let off on a small wooden dock and walked inland to find the wat.

We were first greeted by a zoo of sorts with camel, orstrichs, and goats. Then we wandered around wondering where the wat was. We finally noticed people taking a path through the trees which led to a road. Still confused, we almost turned back.

Across the street we found the wat and the some strange fighting statues. The wat is also accessible by land, so between the boats and the tour buses, the place was crowded. We pushed our way inside to the Buddha that some people were placing gold leaf on.

Outside it was impossible to get a good photo of the tree covered wat without a bunch of people in the shot. But there were some fun cutouts to take pictures in… 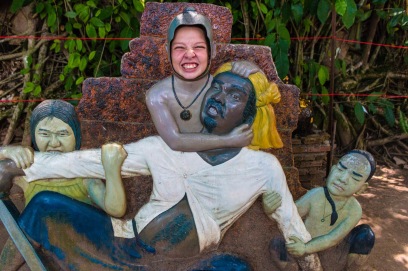 After this we were ready to head back to Bangkok, but there was one more thing I really wanted to do: feed swimming monkeys!

Rand does most of the trip planning, but sometimes I read up on a place before we visit. I found out that near Amphawa there is a place you can go and charter a boat out to where monkeys will swim up to your boat if you feed them. I had a general idea of where to go, but wasn’t sure how to get there.

We walked towards where the songtheow had dropped up off the day before and came upon the “bus” station where the minivans leave from. We tried to communicate that we wanted to go to the swimming monkeys.

I knew the word for monkey in Thai, so I kept saying, “Ling” and pantomiming swimming and eating. Eventually the same tuk tuk driver that had taken us to our guesthouse came over, puled out his cell phone, and showed us a video of the swimming monkeys.

We negotiated a price of 700 baht to take us there and back. The seven of us (we had two friends with us that day) hopped into the tiny tuk tuk. Six of us crammed in the back and Rand shared a seat with the driver, hanging on for dear life during the twenty minute ride that included bumpy bridges and going the wrong way on the berm of a freeway.

Grateful to have made it there alive, we made our way down to the dock where our tuk tuk driver secured us a boat out to the monkeys for 1000 baht. We didn’t try and bargain because I really wanted to see swimming monkeys, dang it!
We went up the river a short way until we were almost to where the river emptied into the sea. We stopped near the shore where a group of monkeys was gathered. As soon as they saw us they started swimming towards us.

We had a giant bag of rambuttan and giant bag of cucumbers that we bought for 100 baht each at some stands that our tuk tuk driver stopped at on the way there. Thank goodness for the driver communicating to the vendors that we wanted enough food for the monkeys because I probably would have bought a couple of bunches of bananas and that wouldn’t have been enough. There were tons of monkeys!

We threw the food to the monkeys and often they would catch it. They preferred the rambuttan to the cucumber and would peel it before eating the delicious fruit inside.

A couple of aggressive male monkeys tried to climb into the boat. We shooed them out and continued throwing food to the other monkeys including a mama with a baby on her back. I was having so much fun and I didn’t find out until I watched the video later that my oldest daughter was shrieking in terror the whole time.

After this excitement, we made our way back to Amphawa, this time with our friend Jarek hanging on for dear life. We got tickets for the 4:20 minivan to Bangkok and got back in time for dinner.

We had a great time in Amphawa. During this part of our trip, we were spending most of our time in Bangkok, Rand and I teaching study abroad classes and the girls getting some school work done, so it was great to get out on the weekend and do some traveling. It was also nice to find out that there is no need to book tours for trips outside of Bangkok. Independent travel is pretty easy and a lot less expensive.

One thought on “A Weekend in Amphawa”