There is just something about visiting ancient ruins that makes you keenly aware that you are walking on the same ground as people who lived thousands of years ago. It makes sense, or course, that seeing these crumbling buildings would conjure a sense of the past. And our trip to Ayutthaya was no different.

We took an early morning 3rd class train from Bangkok’s Hua Lamphong station to Ayutthaya. The train had hard seats and no A/C, but it only took around 2 hours to get there and cost just 20 baht (about 60 cents), way cheaper than the 2nd class A/C train (245 baht).

We were traveling with Rand’s students and he decided that the easiest way to get around would be to rent bikes. Now 2/5 of our family are not known for being good bike riders. Neither Sierra nor I are confident riders. Sierra crashed into a ditch when we rode bikes in Vietnam three years ago and I wiped out spectacularly as a teenager while trying to stealthily ride passed a cute boy’s house with a friend.
But I imagined Ayutthaya to be like Angkor Wat, long, flat, dirt roads between ruins with only a few tuk tuks and motorbikes driving on them and figured we would be OK.

Turns out Ayutthaya is not like that at all. It is a relatively big town with wide paved roads and lots of cars and motorbikes The ruins are scattered throughout the bustling town. But we had already made the plans, so it was too late to back out now.
We rented bikes across the street from Wat Mahatat. We were given two tall bikes and three shorter bikes. Since Kali is taller than I am, and I suck at riding, I gave her the second tall bike. The short bike was too short for me and the pedals were wobbly, but we had already paid for the rental, so I dealt with it.

All the heads of the stone Buddha statues in this temple had been chopped when the city was sacked by the Burmese in the mid 18th century. Most people come to this wat specifically to see the head, but I enjoyed the other ruins as well. Most of the buildings had crumbled to just a few columns of bricks, but I found the headless statues a fascinating reminder of brutalities of war. 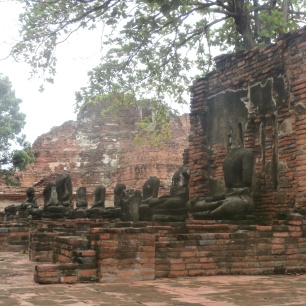 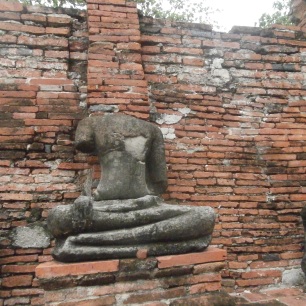 The neighboring wat, Rachburana was more intact. A large tower loomed over the rest of the ruins. Arwen, Kali, and Rand climbed up to peek inside. Apparently Mortal Kombat was filmed here and many of the students were excited about that.

So far we had only biked a few blocks and had mostly stayed on the sidewalk. Now we were heading across town to see a giant reclining Buddha. So the 16 of us pedaled in a signal file line down the road creating the nerdiest biker gang you ever did see.
At the reclining Buddha we were hot and tired after swerving to avoid cars, failing to make it up the hill to cross a bridge, and crashing into fellow bikers. Most of us sat in the shade irreverently wondering if the reason the Buddha was cover with a yellow cloth was because he was cold. 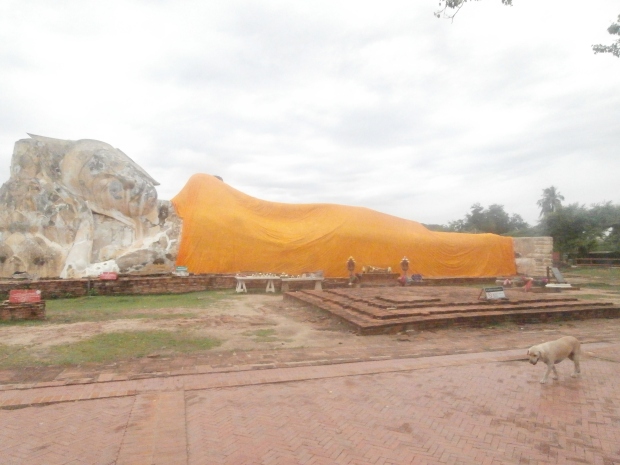 The final wat for the day was outside city center across the river. Miraculously we all made it there in one piece. This was the largest and most intact wat we saw that day. It was well worth the treacherous bike ride to get there. (It wasn’t really treacherous. We walked our bikes on the sidewalk to cross the busy bridge.)

Here we said goodbye to the students, most of whom were going back to Bangkok that evening. As a family we slowly and carefully made our way around the outer road that encircled the city back to our guesthouse. We thought about stopping for Ayutthaya’s famous roti sai mai, spun sugar served in a crepe-like wrapping, but decided against it because there was nowhere to leave our bikes.

We passed the roti sai mai stands and began the final stretch of road to our guesthouse. Although hot and tiring and awkward at times, we had successfully biked around Ayutthaya without any mishaps or injuries besides a shin bruised on a wonky pedal (me). Until now…

One minute Sierra was riding along in front of me, the next she was splayed out on the side of the road. After the Vietnam incident, none of us were surprised that Sierra crashed, but this time she had an excuse. The hand brake on her bike had completely broken off. She stood up, dusted herself off, and we assessed the damage.

Her toe was bleeding and her foot hurt, but she was otherwise OK. She limped along and walked her bike for while and got back on the bike to ride the last bit.

So one small crash from the most frash-prone member of the family due to bike malfunction. Not too bad. But then, one street before the bike rental shop, as we got off our bikes to walk them across a busy intersection, my shoe got caught on the bike when I lifted my foot over the bars.

Boom, down I went.

It was more embarrassing than painful. I pushed myself up off the road, picked up my bike and quickly crossed the street while my family laughed at me.

That night we went to the night market for dinner. And like most night markets in Thailand the food didn’t disappoint. We got panang curry, mini waffles, chicken skewers, and something that tasted like caramel rice crispy treats.

The next day we visited Wat Lokayasutha.

The day before had been hot, but this day was HOT.

Kali: all smiles despite the sweat dripping down her forehead and nose

Instead of visiting more ruins, we sat under a tree trying to not to melt until it was time to catch the train back to Bangkok.

We still hadn’t tried roti sai mai. So with some confusion at first, we explained to a tuk tuk driver that we wanted to get roti sai mai and then go to the train station.

At the train station while we waited for our train, we sampled the sugary confection. Each bag contain straw-like strands (it matched Arwen’s hair!) of spun sugar and several roti. You put the sai mai in the roti and wrap it up like a burrito and eat it. We had to experiment to get the right ratio of sugar to roti. If you put too much it was too sweet. 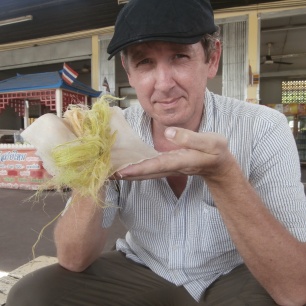 Then with just a 2 hour train ride, we were transported from ancient to modern as we said goodbye to the ruins and returned to Bangkok.