The roads from Leh to Pangong Lake to Tur Tuk and back to Leh are not for the faint of heart (or stomach). When we began our week long journey in Ladakh, I was not feeling so well. So I spent most of the cliff-hugging-switchback-mountain roads drive with my eyes closed to keep my head and belly from spinning.

It was too bad because the scenery was spectacular, although quite barren. However my forced eyes closing was also beneficial because I couldn’t see how close our jeep was to tumbling over the guardrail-free edge of the road with a sheer cliff drop. 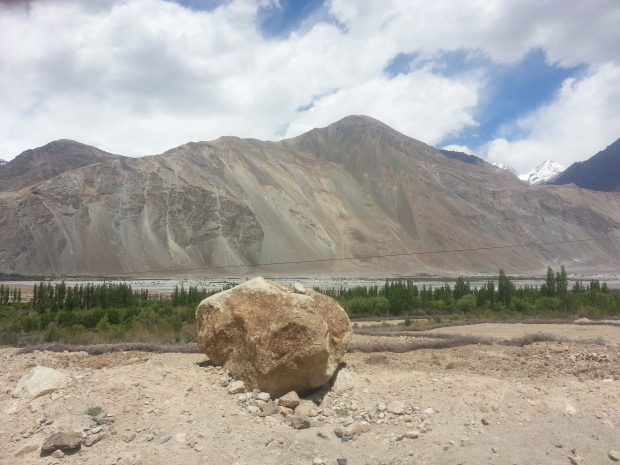 Half way from Leh to Pangong Lake we crossed the Chang La Pass. At 17,590 ft, we gasped in the low oxygen and touched snow for the first time in 3 years.

At Pangong Lake, we booked a very basic room (the beds were wooden “tables” with thin mats on top). Luckily, they provided thick, fluffy blankets because it was freezing! The wind wiped around our ears when we exited the jeep.

I was still feeling under the weather, so I climbed on the table bed and curled up in the massive blanket where I stayed until dinner time. I couldn’t even summon the energy to go down to the lake’s edge. But it was pretty from a afar.

The next day we rode to Tur Tuk. Since it was still spring, we drove over the babbling brooks that crossed the road. I was feeling better and enjoyed the views more this day.

Still the bouncey roads left my back aching. In Turk Tuk, our driver left us at the bottom of a rocky, switch backed path and pointed up a steep hill to where we would find a homestay.

I was tired, cold, and hungry and let everyone know how miserable I was as I trudged up the hill.

At the top was an amazing plateau. Green fields spread out across the flat ground. Rocky mountains towered over in all directions. Stone houses dotted the landscape. Streams flowed through the fields and down the hillside.

But I was in a bad mood, so it took me another day to enjoy the beauty. I felt sorry for the locals who lived here in the cold weather with no heating and only electricity from 7-11pm. I was tired of traveling in places without modern conveniences and here were these people who live without them all of the time. 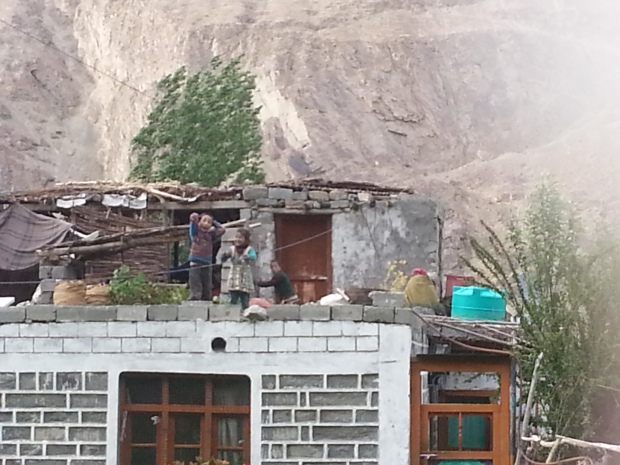 I used to fantasize about living in Little House on the Prairie times. But then I became a an adult and realized that it would suck.

I stood shivering, watching the women working in the fields that evening. I felt guilty that I get to go home to the US with huge grocery stores, a washer and dryer, and a hot shower. 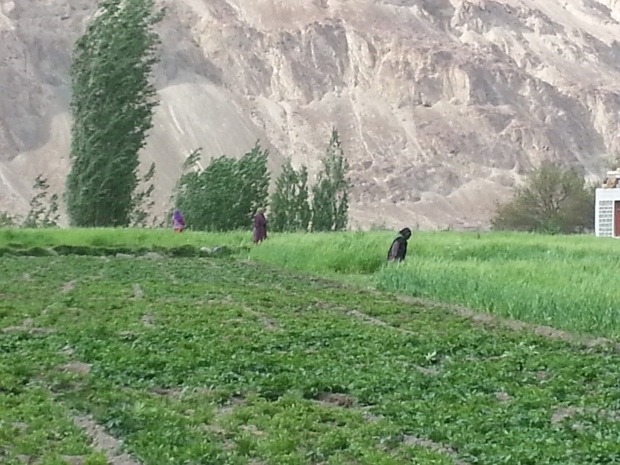 But over the course of our 3 days in the little village that was part of Pakistan until 1971, I grew to appreciate the fairy tale setting. It really was beautiful. Sierra was in love. 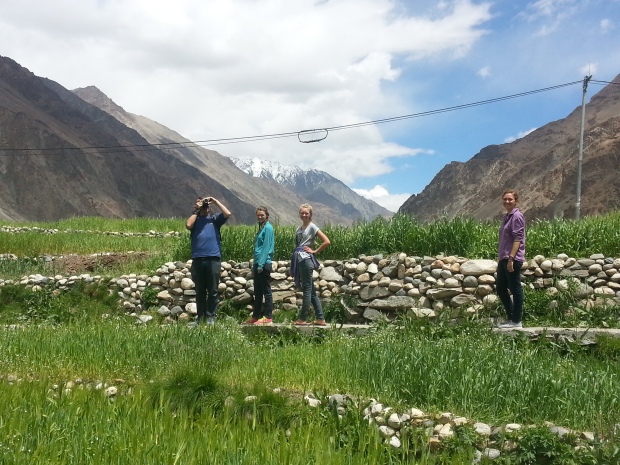 The locals were happy and friendly. 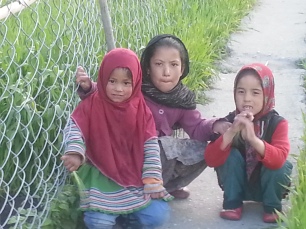 I even got used to the uphill climb to the “secret” paradise plateau after going down to the little town for lunch everyday. Our home stay provided fairly delicious breakfast and dinners. Eggs and chapati for breakfast and a variation of dal and rice with a vegetable and chapati plus a fantastic type of fresh salsa for dinner. 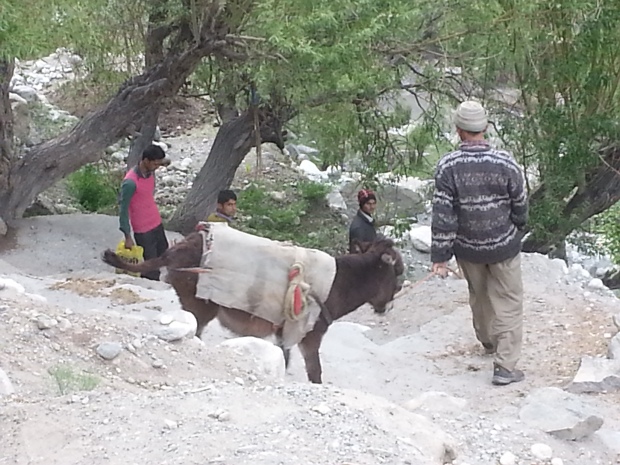 Locals making their way down the steep hilll

When we were ready to head to Diskit, we weren’t sure how we would find a taxi. The area just recently opened to tourism, so there are no travel agencies. But when we asked at a local restaurant, we were easily hooked up with a driver.

There are check points and military outposts all over Ladakh since it’s so close to the Pakistani border. Several times during our journey we had to stop and show our permit and passports. But it was always quick and simple. As we left Tur Tuk, the officers asked to get a picture with us. We agreed and I gave the driver my camera to get our own picture. Unfortunately I didn’t realize until we were back in the car that the driver had only focused the cell phone camera instead of taking any pictures. Bummer.

We stayed the night in Diskit it but were too lazy to visit the sand dunes or monastery.

The next day we crossed the Khardung La Pass, which claims to be the highest motorable pass in the world. 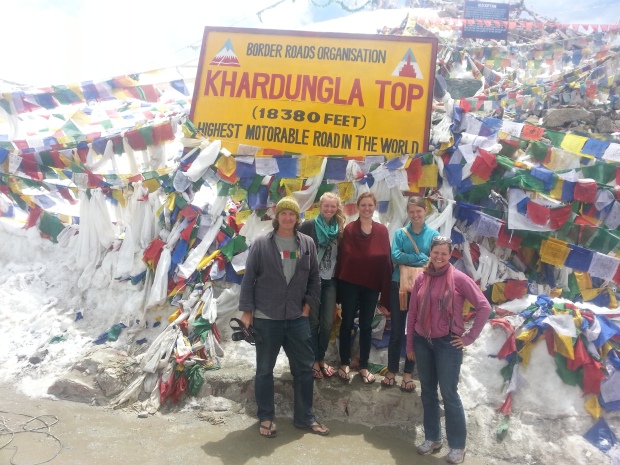 I would also say it has the worst bathrooms in India (which is saying a lot). The stall that wasn’t filled with snow or slush had poo on a pile of snow at eye level and blood splattered on the ice covered foot pads. (Trigger warning: photos below)

Then we just had a white knuckle ride to the valley where the driver seemed to be balancing the car on the edge of the cliff because the road was smoothest there.

After a week in Nubra Valley, we laughed at how excited we were to return to the “civilization” of occasionally working, slow WiFi and hot showers in Leh.