When we arrived in Leh, I was tired. And not just because we landed at 11,483 ft. We got to Leh on our 11 month tripaversary and I was travel weary.

The announcer at the airport warned us to take complete rest for 24 hours to get used to the elevation. And I was just fine with that.

It was also very cold when we arrived in Leh in mid May. After living in Hawaii for 6 years and then traveling in the tropics for almost a year, our bodies were pretty shocked by the 0 C or below temperatures. But it was fun to bundling up in sweatshirts and scarves and even wearing the tennis shoes we have been lugging around for a year and never worn.

In the sunshine, it was pleasant during the day , but we shivered a lot at night. Most of the restaurants are outdoors and only the really fancy hotels have heating. We spent our nights the first week or so curled up under several big fluffy blankets.

After a couple days rest, we started exploring Leh and the surrounding area. The area is known for its beautiful mountain scenery and stunning monasteries. We took two different trips out to visit the monasteries. We saw several different monasteries and stayed overnight at Lamayuru 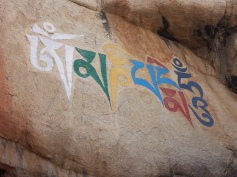 The girls joked that I hated monasteries. I was still travel weary. And feeling the effects of the altitude. And out of shape. So I didn’t have the best attitude while we were climbing around the hillside monasteries.

The girls would say, “Mom, you hate monasteries.”

And I would reply, “of course, it has the word, “stair” in it.” Then whine about the number of stairs we had to climb at the monasteries.

Still they were fascinating. And so photogenic. Rand got some amazing shots.

The monasteries also had the honor of having the most primitive toilets with the best views. A dirt floor with a hole over the cliff side and a window looking out towards the Himalayan mountains. 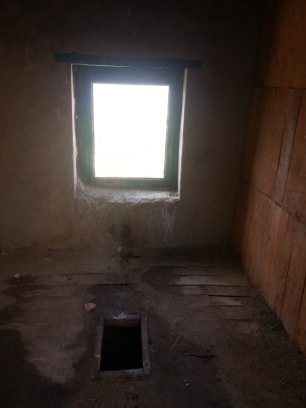 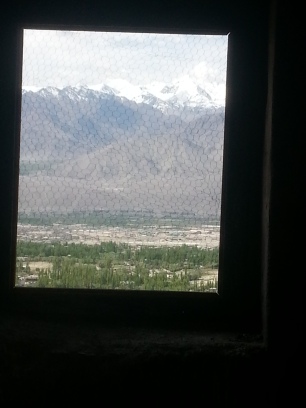 After months in smog-infested cities in India and Nepal, we were amazed by the blue skies with puffy white clouds.

Leh and the rest of Ladakh are so clean compared to the rest of India. Trash cans labeled “use me” were a frequent, though surprising, sight. Kali referred them as the endangered wild Useme. 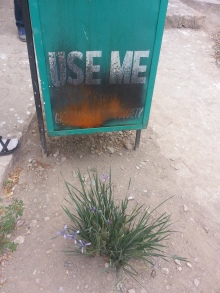 Between the clear skies, clean streets, and laid back atmosphere, we felt like we were no longer in India.

In Leh we walked up to the square white box. Later, we climbed up to Leh Palace. Another day we hiked up to the Shanti Stupa. All were interesting sights in their own right and provided spectacular views of the city below and the mountains in the distance. 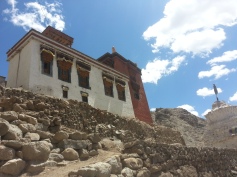 We also spent a lot of time in Leh just chilling out. We had three weeks to kill before heading to Delhi for our flight out and spending time in the cool mountain weather sounded much more fun than melting in the heat of the lowlands. Even if it meant dealing with the spottiest WiFi in all of India.

The weather slowly got warmer and each day more restaurants and shops opened. We made friends with the owner of Crossroads Restaurant where we frequently enjoyed pitas with hummus and tzaziki and also spaghetti and meatballs. I shopped for a pashmina and when I didn’t have enough cash the shopkeeper told me to just bring the rest the next day.

But the next day I was terribly sick. More sick than I can remember being in my adult life. My head hurt so much I couldn’t read or watch a movie. I laid in bed, sleeping almost all day.

Figuring it was a virus*, I rested and drank fluids and tried to eat the bland food Rand tracked down for me. I didn’t leave the hotel room for 3 days. Rand had to find the shop and pay my debt.

If I was going to get very sick, this was the perfect time in the trip for it to happen. We had a clean, comfortable room with a hot shower and no plans that week.

Almost last, but not least, Leh was one of our very favorite places in India. As we flew to Jammu, the snowcapped Himalayan mountain view from the sky reminded me what a spectacular place we had just spent the last few weeks.

*Looking back, I think it was probably altitude sickness. I became ill while we were on a road trip in the mountains of Ladakh.