It was early, very early. The gates opened at dawn. We stood in lines by gender. Rand in one line and the girls and I in the other. Soon we would see one of the most famous buildings in the world, the Taj Mahal.

As we push towards the security gate, I lost track of Rand. India is more of a mob cultural than a cue culture. If you don’t push in you’ll never get in. I had to stop and send my purse through the x-ray machine. By the time we got through Rand was nowhere to be found, so the girls and I headed to the arched entryway.

Once through the arch, we looked around, but still no sign of Rand. So we took the obligatory selfies. 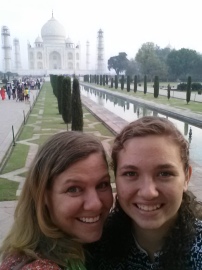 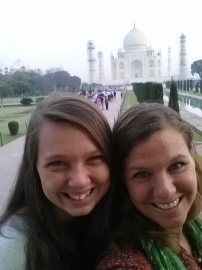 Kali said, the fact that we hadn’t met up with Rand was “causing her stress.” So we walked back to the entrance just in case. Not finding Rand, we return to the Taj Mahal gardens. We took more pictures and then waited. 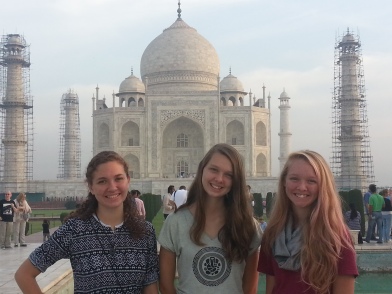 Eventually, I gave up and we walked up to see the Taj up close. At the top of the stairs, I looked around and there on the east side of the Taj Mahal, sitting on a step facing us was Rand. Of course, I thought, he had gone to take pictures where the rising sun was casting a beautiful glow on the bright white dome. 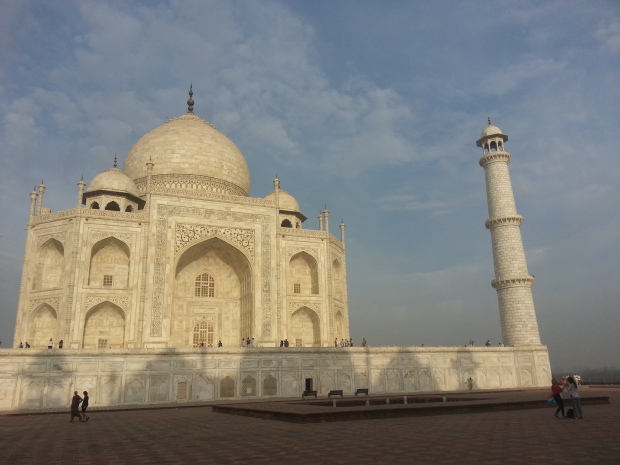 We walked down to meet him.

By dashing ahead of us, Rand had gotten a pictured of the Taj and its reflection pools with no people in the shot. He would only need to photoshop the scaffolding off 3 of the 4 minarets and it would be the perfect iconic photo of the famous building.

The inside of the Taj Mahal is pretty boring compared to its spectacular façade. A poorly lit circular room is filled with some marble structures.

Outside the marble bricks sparkle in the sun. Intricate floral design surround the arched doorways. 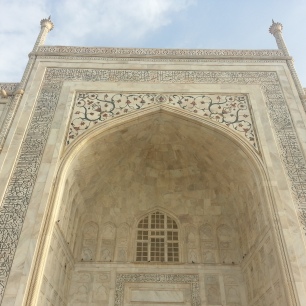 After sufficiently admiring the building, we returned to the gardens to take more pictures.

Despite tales of westerners being mobbed to be in photos with Indian tourists, we were only asked once. We joked that we were disappointed since we have been much more popular at other attractions

We exited the complex and returned to the streets of Agra just in time for breakfast.

In stark contrast to clean, green, beautiful area surrounding the Taj Mahal, Agra is about the worst place you can imagine.

The dirt roads are covered in garbage. A smell of sulfur frequently wafts through the air. The air is hazy from pollution. Mangy dogs roam the streets.

In the evening we took a rickshaw to a park that over looks the backside of the Taj Mahal. On the way, we saw a dying monkey laying on a flatten cardboard box. Under a bridge I saw people living in the worse conditions I have seen since arriving in India (and I have seen some really bad living conditions) Dozens upon dozens of makeshift, tarp covered houses were crowded together, surrounding by piles of garbage.

Then we were at the park overlooking the opulent building and thoughts of the destitution of Agra were put aside for the moment.
The sun began to set behind through haze and Sierra tried to teach me how to take proper selfie.

And the girls and I took hand heart shots of the Taj, while Rand took real pictures.

While in Agra we also visited Fatehpur Sikri , a series of royal palaces, harem, courts, a mosque, private quarters built during the reign of Emporia Akbar in the 1500’s. 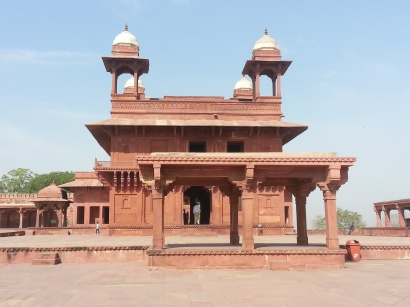 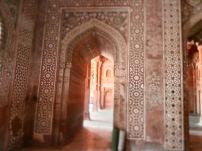 After touring the palace Rand was ready to move in and the girls started claiming which room they wanted.

The Taj was amazing. Fatehpur Sikri was interesting. Agra was pretty gross.

After 3 days, we were ready to move on. It was time to leave India and head to Nepal.

“There's neither malice nor remorse on the Serengeti”
Standing on the equator 🌞
Game drive in the Masai Mara. Part of the park on the north side of the river is actually in Tanzania, so unexpectedly got to add another country to my count 🙌
Another kitty #leopard
This is Dennis and Asa. We hired them to be our porters for the gorilla trekking, not because we needed porters, but to support the community that had been hit hard by lack of tourist income because of Covid. They were so sweet. In addition to carrying our bags, they also watched out for me and gave me a hand anytime I looked like I needed help. The hardest part of the trek for me was not the impenetrable jungle but the steep uphill through a tea field before we got to the jungle. Halfway up I was sucking wind pretty hard (I want to blame to the elevation since I live at sea level, but let’s be honest, lack of fitness probably played a role, too 😂) Dennis and Asa noticed and one of them grabbed my hand and starting pulling while the other pushed from behind. It was pretty hilarious, but I kept a straight face and let them do their job.
Here, kitty, kitty! 🐆 #cheetah