In the center of the small town square stood a mound of wood ready to be lit for a bonfire. We milled about with the crowd encircling the woodpile, waiting to see what would happen next.

It was the night before Holi, India’s springtime festival of colors. We watched as locals placed paper and other items in the spaces between the sticks, for prayers or wishes, I think.

As darkness fell, the bonfire was lit and music blared from a loudspeaker. Soon people (mostly young men) began wishing us “Happy Holi” and anointing our cheeks and foreheads with the colored powder. Luckily, we were wearing our most worn out clothes, just in case. We weren’t sure if the color happened the night before or just the day of the holiday.

The crowd began circling the bonfire clockwise and we joined in. 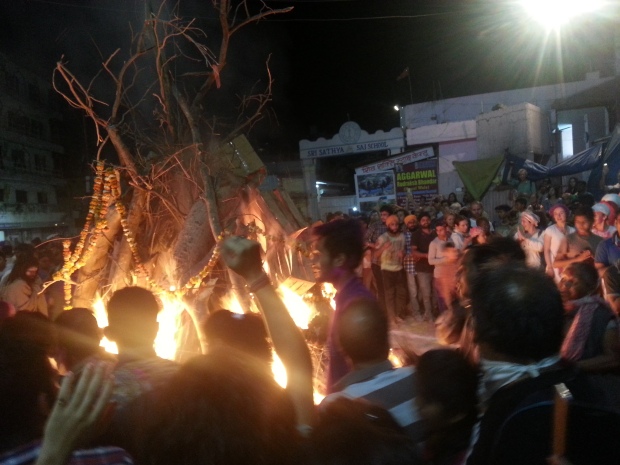 We had been warned that Holi can be a time of drunkenness and groping, so we were cautious. Since it was early in the evening most people were just friendly and joyful. One drunk guy told Rand, “Your daughters are my daughters” and gave us big hugs, but we never felt unsafe.

Still after about an hour of revelry, we were covered in color and decided to head in for the night.

The next day we put on our already colored clothes and made our way out into the streets to see what the daytime festivities would be like.

We heard that in addition to colors, water is often throw or sprayed, so we brought squirt guns.

We walked out to the main street and made our way to the town square on the other side of the bridge.

Some people had color on them and some didn’t. The first group of guys that approached us looked at us for approval before smearing us with color. Once we had color, it was a free for all and every group we passed added more to our faces.

Water was being thrown from second story balconies. We ran past to avoid getting soaked so early in the day, but often failed. The water from our tiny squirt gins wasn’t much of a retaliation. 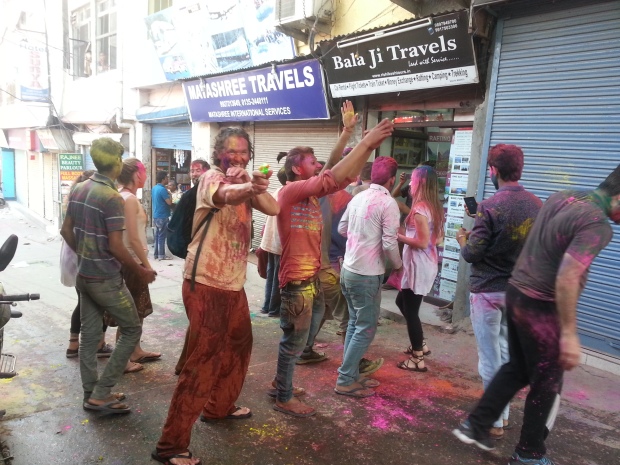 We had bought our own colored chalk but were most often the colorees instead of the colorers. I wasn’t sure if there was a proper way to smear color on someone and if it was different for men and women. Mostly it was young men applying color to our faces. Once I got up the courage to return the greeting and color and the guy shook his head and turned away. After that I was more timid and only threw the colored chalk.

When we arrived at the square, people were wishing each other “Happy Holi!”, sharing chalk, and taking selfies. Where the bonfire stood was now a pile of ashes. Music began playing and the crowd grew. Soon everyone was dancing and throwing chalk. A group of girls pulled Sierra, Kali, and Arwen into the dancing, chalk flying everywhere. 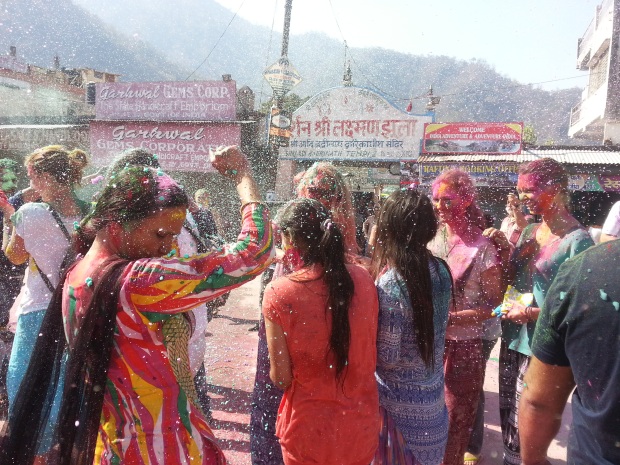 We danced and threw chalk until the sun was high in the sky and it was starting to get hot. 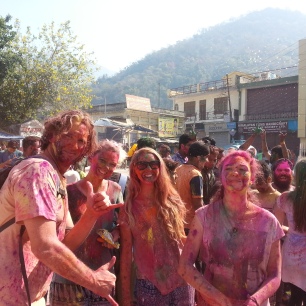 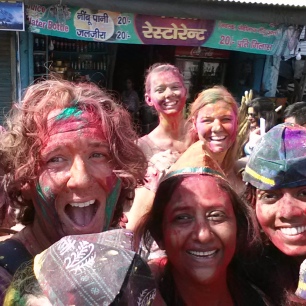 With smiles plastered to our faces and covered from head to toe in a rainbow of colors, we headed back across the river.

We stopped for selfies requests along the way. And took some of our own pictures and selfies. 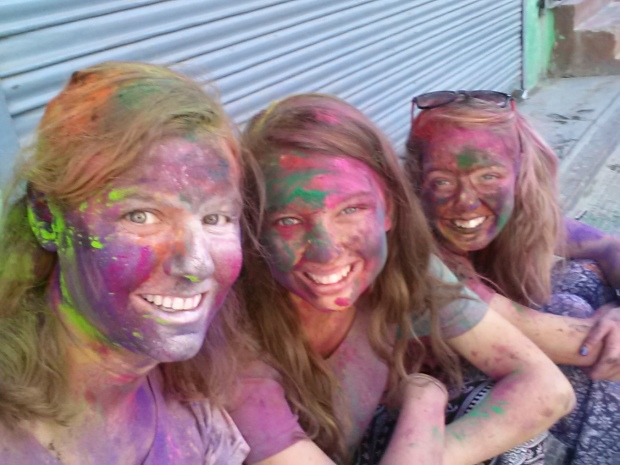 Back at the guesthouse, we showered and soaked our clothes. We were left with pink stained hair for a few days to remind us of one of the most fun things we have done on our round the world trip. 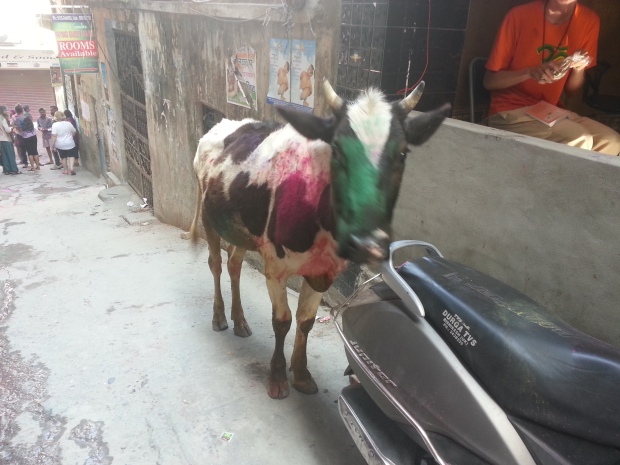 Even the cows get in on the fun!

One thought on “Celebrating Holi in Rishikesh”

Bring back the roaring 20s. We're ready. Happy New Year! #2020
Seasons of love ❤💛💚💙 #december24th9pmeasternstandardtime
Then and now. 24 years.
Neither Rand nor I are cat people (we are both allergic). But a few weeks ago we couldn't resist the cute meows of a stray cat that came to our door every morning and we started feeding her occasionally. Arwen named her, Wheat. This morning there were two kittens with her at our door. We are not sure if Wheat is the mother, but we named them, Baguette and Brioche. #arewecatpeoplenow
It's been a while since I've worn mom jeans, like maybe since before I was actually a mom. Who wore it better? 😄
All tucked into my cubby. Starting to get blisters on my feet. I guess it's about time to go home