Seeing a tiger in the wild in India is largely a matter of luck and persistence (and a little bit of know how).

Rand was determined to see a wild tiger in Ranthambore National Park in India. He spent lots of time online figuring out how to give us the best chance of seeing a tiger. He found out that you can book a safari online a few months in advance. On the exact day we could do a booking for our dates he got online. And like pretty much all online things in India, it didn’t work.

After many tries he gave up. He learned that you can go to the local booking office at 5:30 in the morning to book a safari that same day. But then he found out that the process is complicated (like pretty much everything else in India) and maybe even impossible. So we decided to just book through our hotel when we got to Sawai Madhopur.

We arrived by train at some unreasonable hour of the morning. When we got to the hotel, we booked an afternoon gypsy safari and then took a morning nap.

Refreshed and excited, we hopped into the jeep and headed to the park. We were told we would be going to zone 6. There are ten zones in the park and only a certain number of vehicles can go into each section per day. Our guide said the was a mother and two cubs in zone 6.

Almost as soon as when arrived in the park we saw a paw print. I thought that was a pretty good sign, so I was hopeful. We drove around and saw spotted deer and samba deer (which the guide called “tiger chocolate “). 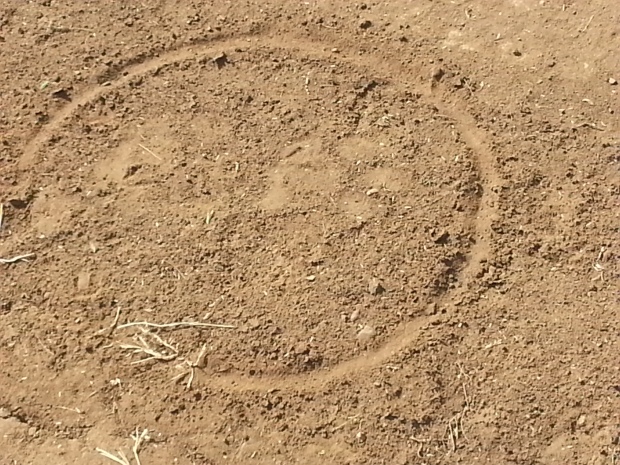 After about an hour we stopped at a rest area and a monkey jumped into our jeep. 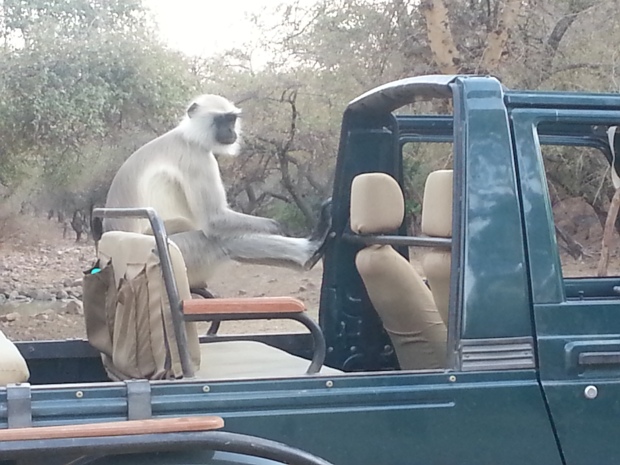 Another hour of driving around passed and still no tiger. At the watering hole, the deer seemed way too calm. We were disappointed.

Back at the hotel, the owner asked, “Did you see a tiger?”

“No tigers,” we replied.

We knew that it could take a few tries to see a wild tiger, so we booked a morning safari for the next day. Hopefully, morning time would be better. This time another traveler would be going with us, so we only had to pay for 5 seats in the gypsy jeep instead of 6. We were glad to save the 2,000 rupees.

For this safari we were taken to zone 8. We drove up and down the dusty hills. The scenery was not nearly as nice as the dappled forest in zone 6.

After about an hour of only seeing boring landscape and deer, we stopped at an overlook. The smiles on our faces are masking the discouragement we are feeling at not yet seeing a tiger. 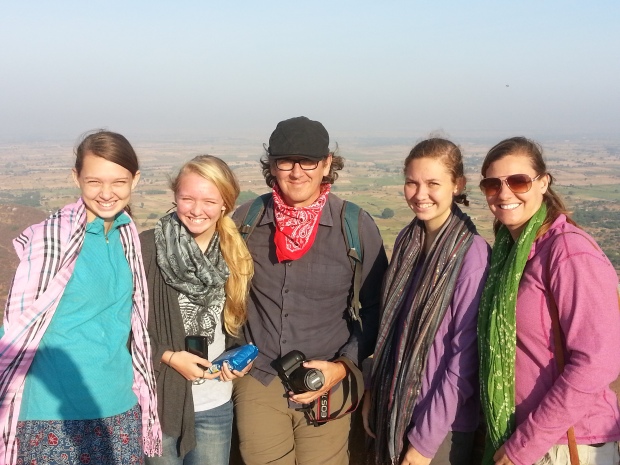 Another hour or so of driving around and all we saw were more deer and an old paw print.

Our disappointment showed on our faces when we returned to the hotel and were asked again if we had seen a tiger. The staff seemed surprised that we hadn’t and asked if we wanted to book another safari for the afternoon. Frustrated, we said, no.

At this point, we had spent a lot of money and had not seen a tiger. We didn’t feel very hopeful that we would see one if we booked another safari. We thought about heading to Kanha or Bandhavgarh later in the trip and giving up at Ranthambore instead of wasting more money.

We talked to the hotel staff and explained our frustration. They suggested we go to the booking office with them in the morning and book a canter. We hadn’t wanted to go in the large canter jeep with 15 other, possibly rowdy, people. But if it would give us a better chance of seeing a tiger, then maybe it would be OK. Also, canters are much cheaper than gypsies, around 6000 rupees for 5 people in stead of 10,000.

I talked to the hotel staff about getting into a good zone. We had learned online that zones 6 and 8 are not good for tiger sightings. The staff said that we should request zone 3 or 4 at the booking office the next morning.

At 5:30 the next morning, Rand left with the two brothers that run the hotel we werexpect staying at. He returned with tickets for a canter going into zone 4.

With anxious anticipation, we entered the park one more time. We followed the line of gypsy and canter jeeps down the dirt road. In less than 20 minutes, our guide pointed. There in the trees was tiger sauntering through woods. We could see her clearly, but wanted to get closer. One jeep was right next to her. Our driver moved us a bit closer and we watched for a few minutes until the tiger wandered into the next zone.

We continue our tour through the park, excited that we had seen a tiger. Still I hoped we would have one more sighting, maybe to make up for our first two failed attempts.

We saw a crocodile in a small lake and lots more deer. It was interesting to see how camouflaged the deer were in the dappled light with their antlers mimicking the bare tree branches. 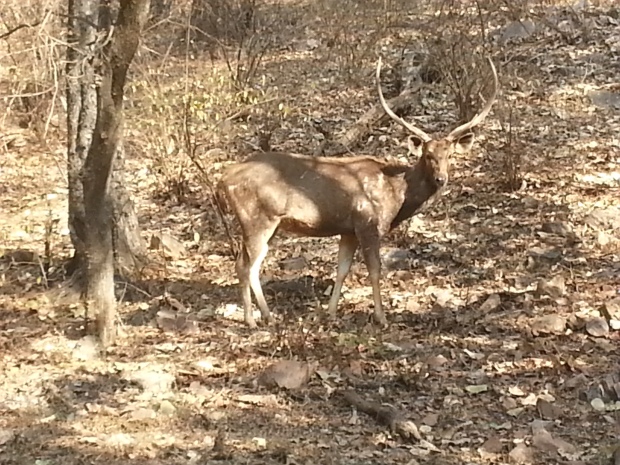 We came to an area with tall grass and stopped. I looked around for a tiger, but didn’t see anything. Then, suddenly, a tiger came walking out of the grass. She meandered over to a shady spot under a tree and laid down. We watched her and took pictures until it was time to leave the park. 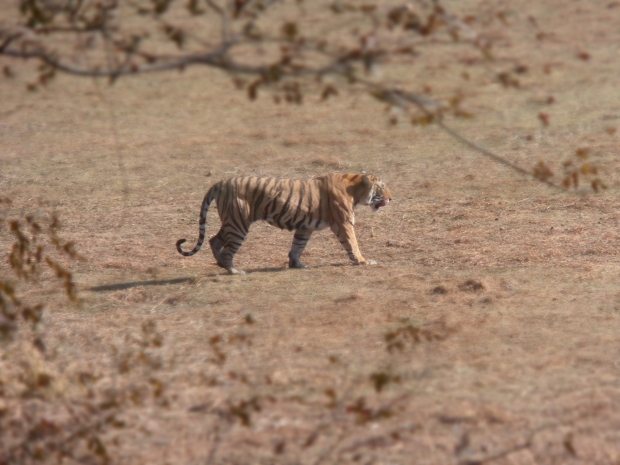 Satisfied we returned to our hotel. This time we happily reported that we had seen, not one, but two tigers. We thanked the hotel staff for their help. They said, if we ever come back to call them 3 months in advance and they would book us a safari in a good zone (3 or 4).

If only we had known this ahead of time . . . But we had persistence and finally got lucky and we got to see two wild tigers in India.