I looked across the scrub brush and could hardly believe I was sitting atop a camel, riding through a Rajasthani desert.

We had booked an afternoon camel ride and a desert overnight through our guesthouse in Jaisalmer. Ba, the owner of Hotel Mirage, said that we would be going out to his village to meet our camels and guides.

We rode in a jeep for 45 minutes through desolate terrain until we reached a tiny village with a few sand colored brick buildings. We were invited in to sit in the shade of an interior stone courtyard. I was surprised at the temperature difference from the desert outside.

Soon we were led outside to the camels. A village girl came up to us and spoke rapidly in her local language. I had no idea what she was saying, but she seemed interesting in my phone that I has been using to take pictures. I offered to take a selfie of us and she leaned in. I showed her the picture and she seemed satisfied. 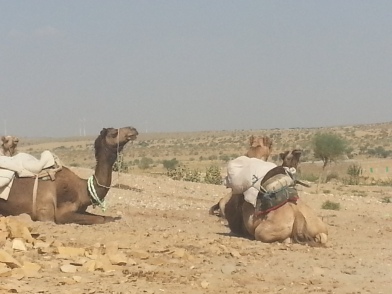 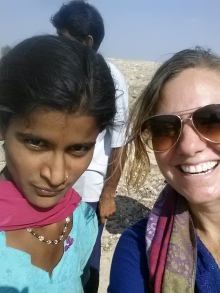 The camels sat in the sand and we were instructed to climb into the saddles and hold on tight as the camels kneeled and then stood.

The ride started out pleasant. I took pictures and selfies and enjoyed the ride.
The younger guide, Abdul, led my camel. The older guide led Rand’s camel with Arwen’s and Sierra’s camel attached with a rope. Kali’s well-behaved camel followed along on its own.

We were convinced that Rand’s camel, Michael, was terribly ill. It kept gurgling and then sticking out its foam covered tongue. You know that sounds a drain makes when it clears a clog? That’s what Rand’s camel sounded like.

Rand with Michael the slobbery camel

After about an hour, camel riding went from fun to uncomfortable. Besides general saddle soreness, the slant of the camel’s hump was causing me to slide forward, smashing my lower abdomen into the saddle horn.

I was grateful when it was time to dismount for the night. All of the camels, except for Rand’s, were hobbled (their front legs were tied together so they didn’t run off to far in the night). Rand’s camel had to be tied to a post in the sand because it turned out that Michael was not horribly ill, but just looking to mate. Apparently female camels are oddly turned on by the bubbling noises and foamy tongue, not to mentioned the foul smell Michael was emitting (which may or may not have been related to the mating).

While waiting for dinner, we relaxed on the sand dunes, took sunset silhouette photos, and Sierra played her ukulele while the girls sang.

Our guides made us a simple, delicious dinner of dahl, potatoes, and chapati.

After dinner the older guide played a rhythm on a tin pan and sang for us. As far as memorable life moments go, sitting in the desert under a million stars with a old Indian man playing a tune on a kitchen pot is not one I will soon forget.

Fluffy mats were set up on the sand for our beds. We laid under the thick wool blankets that kept out the chill night desert air, star gazing. Above us shone more stars than we had seen in the sky since looking up over the Utah desert in Canyonlands many years ago. We could even make out the blurry white stripe of the milky way. Such a contrast from the smog cover sky in much of India.

The next morning I awoke to breakfast cooking and Michael gurgling. Our other camels were rounded up while we ate breakfast.

We reluctantly mounted our camels, still sore from the previous day’s ride. I am glad we booked only an afternoon ride and one overnight. Any more would have been too painful. As it was I anxiously watched the small village move closer on the horizon, so that I could dismount and relieve my poor nether regions.

Despite the discomfort, riding camels in the desert and sleeping under the stars was one of my favorite experiences in India (and anywhere, really).