On our brief visit to Goa’s capital city, Panaji, we found a mix of present day India and old Portuguese colonial influence.

We stayed in the Fontainhas area with its winding alleys, colorful buildings, and European style balconies overlooking it all.

Thanks to the historic nature of the neighborhood most of the guesthouses were out of our price range so we ended up in a more run down place with no wifi. Internet in India is pretty terrible, but this was the first place that didn’t have any wifi. The exposed roof bricks on the ceiling were pretty cool though and there was a cute view if you stood on the bed.

In the day the neighborhood was a pleasant bustle of Indian energy, but at night it wasn’t well lit and the only people out were men huddled on the street corners. It was the first time I felt really uncomfortable wandering around in India. It didn’t help that one night a drunk man follow us around for several minutes until Rand stared him down and told him to stop following us.

Near downtown Panaji, there are signs denouncing littering, public urinating, and using plastic bags. It was the first effort, I had seen to address India’s massive garage problem. And I will admit the area near the signs was pretty clean.

We took a day trip to Old Goa where the Portuguese had built elaborate churches. As I admired the intricate wooden carvings and the spectacular cathedrals, I wondered whether by enjoying these sites, I was supporting colonialism. 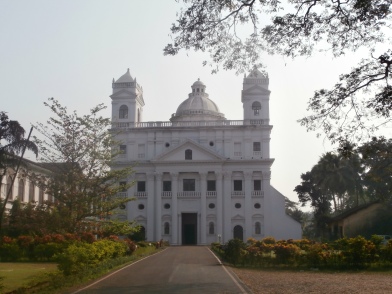 I didn’t however, feel any remorse at Route 66 restaurant where I enjoyed the first cheeseburger I had eaten since arriving in India a month before . Even the McDonald’s in India doesn’t serve beef.

Kali, excited to eat a cheeseburger in Panaji

I may not support the Portuguese colonizing Goa, but I sure didn’t mind their culinary influence. Besides the Christian influence removing the taboo on beef, the Portuguese/Indian hybrid of pork vindaloo curry is amazing. Spicy vinegary sauce with juicy bits of pig – yum!

Panaji was an interesting place to ponder the mixing of cultures. Great things often come from different cultures mixing and melding even if the reasons the cultures interacted is not ideal.