After dealing with the transportation hassles of crowded trains and buses and finding mostly overpriced guest rooms in Sri Lanka, we decided to hunker down on the beach in Mirissa (where we found a reasonably priced room with pretty good wifi) for the rest of our time on the island until we needed to return to Colombo.

The beach in Mirissa is OK. I realize that I am totally spoiled, living 5 minutes down the road from the amazing beaches of north shore Oahu, so I may be a bit pickier about my beaches. But Mirissa beach also isn’t nearly as nice as Khlong Jark Beach on Koh Lanta in southern Thailand.

The bay that Mirissa beach is set in is pretty enough. There is an interesting rock outcropping the juts into the water that you can climb. Restaurants line the sand from one end of the beach to the other. 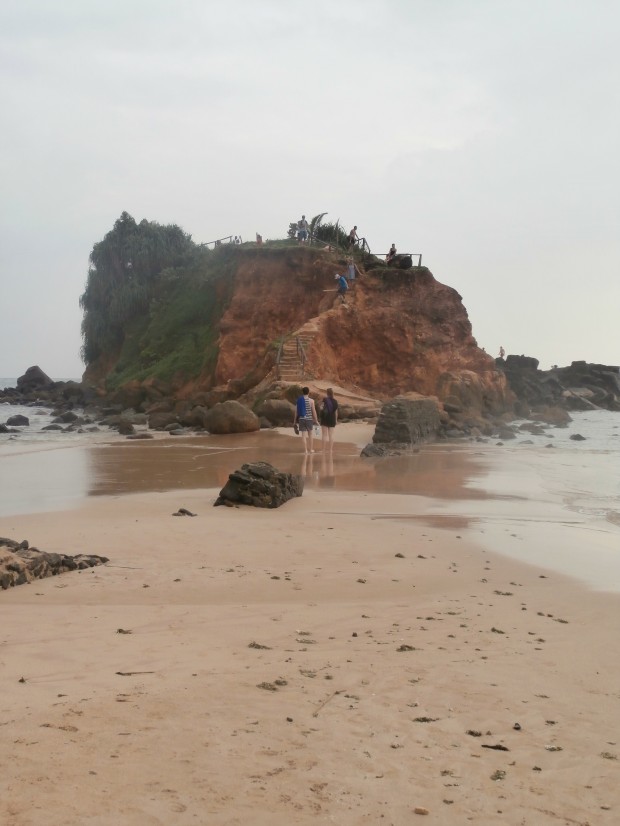 The beach is somewhat crowded. We always managed to find our own space in the water and on the sand, but there were a lot of people. If you like being around lots of other tourists and socializing, this would be a good beach for that.

At night the restaurants set candlelit tables on the sand, so you can eat dinner to the sound of the surf. It might have been romantic if we hadn’t been traveling with our kids. We only ate on the beach a few times because the food cost more than our backpacker budget could handle and much of it was not that good.

Each night the restaurants would display their fresh seafood on tables in the sand. You could choose which fish you wanted and the chef would prepare it for you. 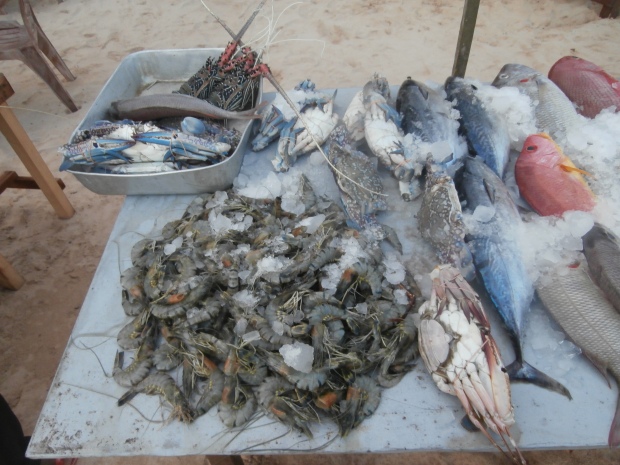 We got red snapper once and it was great. We also got barracuda, but it wasn’t as good. But not a bad as the night we ordered fried chicken and got chicken strips that we referred to as “chicken bricks.” For the most part the beach food was not worth the inflated prices.

So we often ate in local places on the main road. The food was cheaper, but most places were not that good. The food at I and I Restaurant was acceptable sometimes even good, but we got so sick of it after a week we ate cookies for dinner our last in night in Mirissa to avoid going back there.

Even the cute bread trucks that drove up and down the street playing It’s a Small World, had unsatisfying offerings of dry bread and pastries.

Our experience in Mirissa wasn’t all bad though.

Kali, Rand, and I got to surf for the first time since leaving Hawaii six month before. We rented boards (400 LKR/hour)and surfed on the left side of the rock. I was pleased to find out that I hadn’t forgotten how to surf.

Not us and not the same break, but you get the idea

We only surfed once though because we were sore and sunburnt after such a long hiatus (and ineffective Sri Lankan sunscreen). 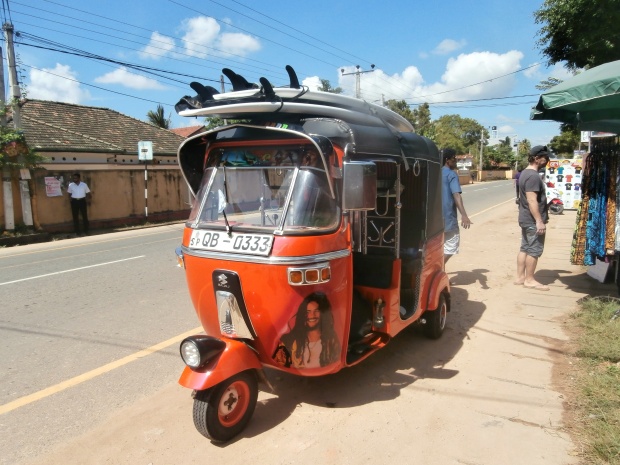 A rickshaw carrying surfboards, probably to Welligama Beach, which has good surfing, but we didn’t make it out to because of soreness and sunburns (and laziness)

We also took a boat out to see blue whales. We booked through our guesthouse and paid 2000 LKR per person about half what we expected.

Early in the morning we took tuk tuks to the dock, boarded a boat with 30 other people, and headed out into the ocean in search of the giant mammals.

We sat bobbing in the sea when the captain shouted, “Whale!”

Just over the surface of the water appeared a shiny black back. Then another, this time we could see the white markings near the head. Orcas! We were seeing orcas in the ocean!

Another call from the captain. This time a grayish back appeared.

The whale surfaced again. This time the long stretch of back glided through the water seeming endless.

The whale’s tale flipped up and then the whale dived down.

We saw several more blue whales before returning to shore. It was amazing seeing these massive creatures in their ocean habitat.

One day we took the local bus to Habaraduwa to see a turtle hatchery. We paid 500 LKR per person to enter the hatchery. There were several types of turtles including some injured ones.

It only took us 10 minutes to walk around the tiny hatchery. I was thinking we would leave soon when Rand started talking to one of the workers about how cute the baby sea turtles.

“Do you want to hold them?” asked the worker.

Of course we did.

After seeing and holding the turtles, we took the bus to Ahangama to see the stilt fishermen. Sri Lanka is known for its fishermen who used to sit on stilts in the water with their fishing with pole. No one really fishes like that anymore, but locals will pose on the stilts for a small fee.

Rand couldn’t pass up the photographic opportunity. (These are my pictures, not Rand’s. His are much more fantastic.) 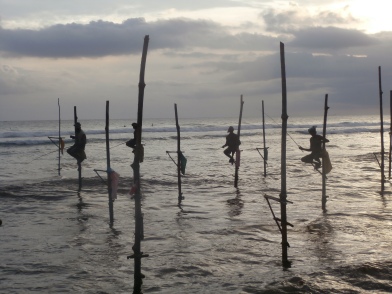 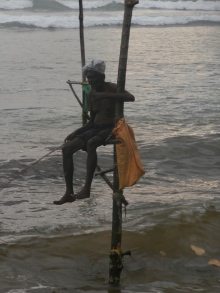 We had a nice time playing in the ocean, surfing, whale watching, holding sea turtles, and photographing stilt fishermen. But we didn’t love Mirissa. We stayed too long and got bored.

Also, we tend to judge a place by its food. Except for the pricey on a backpacker budget fresh fish, we didn’t think the food in Mirissa was very good. Part of that may have been that the local food in Sri Lanka is not varied. At first we loved the kottu, but after 3 weeks we could hardly stand to look at it.

Last stop: Colombo. Can the capital redeem country for us or will Sri Lankan claim this status of least interesting, most unreasonably priced country we have visited so far?