Riding the train in Sri Lanka is billed as an essential tourist experience. It not only gets you from one place to another, it also offers views of the ocean and mountains as the train passes down the coast or through the center of the island. Unfortunately, for the most part, our experience riding trains in Sri Lanka was less than pleasant.

From Colombo to Galle

Rand found out online that the Maradana station is the first stop on route from Colombo to Galle. Getting on here would increase our likelihood of getting a seat in unreserved second class.

We got our tickets and found the right platform. I felt like I had traveled back in time as we sat in the colonial era station. I thought that any minute, men in white suits and turbans would come walking by. Instead we waited among women in saris and men in plaid button down shirts.

Rand warned us that we would need to push and shove when it came time to get on the train.

A train approached a platform behind us and people started flooding off. Suddenly Rand yelled, ”Let’s go.”

We pushed against the oncoming crowd into the flow of people trying to get on the train. Apparently, someone alerted Rand that our train had changed platforms. I pushed and shoved, watching Rand and one of the girls get farther away from me. The other two girls were behind me. I slowed to let them get ahead of me, so that if any of us missed the train there would be an adult in each group.

We all made it on the train. And we even got seats. Whew!

At the next stop more passengers got on. The remaining seats filled and people were left standing. If we had gotten on at this city center stop (Fort Station), we probably would have had to stand. Thank goodness for Rand’s planning and foresight.

After another stop the aisles were filled with standing passengers. Rand had the window seat and I was on the end. A man stood over me, one hand on my seat back and the other on the seat in front of me, effectively blocking me in. I scooted closer to Rand.

Personal space in Sri Lanka is different from in the US. There is not enough room, especially on crowded trains for people not to touch each other.

Across the aisle from me, a woman sat on Kali’s arm rest and leaned her back against Kali’s shoulder. Some part of the man leaning over me kept slamming into my shoulder as the train shook. I was afraid to turn my head to figure out which part.

I moved even closer to Rand. I am sure he did not appreciate me snuggling up to him in the hot non-A/C train car, but my American sense of personal space was being invaded.

At some point the man over me began to clear his throat repeatedly and cough on my head. I leaned back and closed my eyes and tried not to think about it for the rest of the 4 hour journey.

From Galle to Colombo

Because we needed to get our Indian visas in Sri Lanka, we took a train back to Colombo after 4 days in Galle. To get an Indian visa in Sri Lanka, you have to drop off the filled out paperwork, then come back a week or so later to drop off your passport. We couldn’t do the paperwork in Colombo we when first arrived because it was Friday afternoon and the office was closed until Monday.

So back to Colombo we went with plans to fill out and drop off the visa paperwork and then leave on a train to Kandy later that afternoon.

Unfortunately Galle is not the first stop on route to Colombo. By the time we got on the train all the seats were filled.

It was our turn to stand.

I leaned. And hovered. And slammed into others. I felt bad for judging the man standing over me on the first train ride. Before the four hours was up, I desperately wished I were back in the cozy seat of the other train being thrust against and coughed on.

Sierra, who is not known for her stamina, complained of buckling knees and had to be talked down from a panic attack at one point.

When we arrived in Colombo, Rand bought our train tickets to Kandy. Then we took rickshaws to the Indian Visa Office. Brokers whisked us away to help us filled out the complicated Indian visa paperwork. We were happy to pay the small fee to make sure everything was filled out correctly.

Paperwork in hand, we crossed the street to the visa office and took a number to wait for our turn to submit our forms.

It soon became clear that it was unlikely that we would make it back to the train station in time for our train. The tickets were cheap, so I wasn’t worried about it. We would just get tickets for another train. Also, we had seen a McDonald’s on the way from the train station and having only eaten cookies for breakfast on the first train for, we were pretty hungry.

By some miracle we finished at the visa office with 20 minutes until the train left. We could make it back in time if our rickshaws didn’t run into any traffic. I wanted to forget it and go to McDonald’s, but Rand said, “Let’s try.”

From Colombo to Kandy

With 2 minutes to spare we crowded on the train. Yes, we would be standing for another several hours. Hungry and tired, we were all pretty unhappy.

We are smiling in this picture, but believe me, we are not happy to be standing in the aisle on this train.

I attempted to use my backpack as a seat in the aisle. I could balance on my bag with my feet braced in front of me and my back resting against the side of a seat, which had a bar protruding from it that poked into my back.

My sitting was short-lived, however, because eventually the train aisle was so full there was barely room for everyone’s feet. At one point Rand lifted his foot and couldn’t find a place to put it back down. 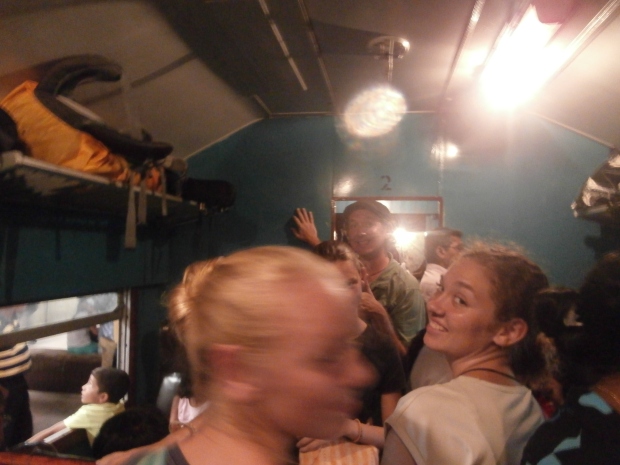 Packed in. Don’t lift your foot.

Sierra almost lost it when a woman was pressed up against her so close she could hardly move.

Luckily after about an hour the crowd thinned out. Two men gave up their seats for Sierra and Kali and a few minutes later another man offered his seat to me and I gratefully accepted. Before too long, no one was standing in the aisles.

I’m not sure if Sir Lankan trains are always this crowded or if the trains were packed because we were traveling close to Christmas and during a school break. In Kandy we tried to get reserved tickets to Ella (because we didn’t want to risk having to stand again), but everything was booked. After such a miserable experience with the unreserved trains we decided to use the bus to get around instead.

From Mirissa to Colombo

To get back to Colombo, we decided to give the trains another try. We took a bus from Mirissa back to Matara. Since the train originates in Matara, we got seats – halleluiah!

It was a fairly enjoyable journey. The heat wasn’t too bad and the scenery out the window was lovely. Eventually, the aisles filled. But no one thrust or coughed on me.

After a few hours my hips started to hurt (yes, I am old), but it was by far the most pleasant train ride I experienced in Sri Lanka.

Perhaps, it would have been more enjoyable to ride the trains in Sri Lanka at a less busy time of year, but as it was, our experience was uncomfortable and most views we might have seen were blocked by the crowds.

2 thoughts on “Trains in Sri Lanka”