Twice now we have ridden elephants in Thailand. Once, in Chiang Mai three years ago. And once, in Kanchanaburi. Both times we rode in seats on top of the elephant’s back.

Recommended by Edventure Project, it sounded like the perfect place for my elephant wishes to come true.

We were picked up at our guesthouse at 8 am and taken up the road to the elephant camp. After putting our personal items and shoes into a locker we were shown to our elephants. Rand and I would ride together and our 3 girls would share an elephant. Three British women were assigned to a third elephant.

Rand did the same and sat behind me. The girls were led to a platform and climbed onto their elephant from there. Apparently, Rand and I either looked strong enough or foolish enough to climb up from the ground. It was actually pretty fun. 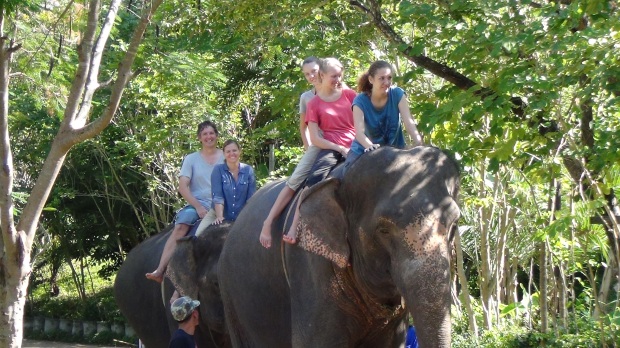 One of the British women refused to get on the elephant, so she walked along beside us as we rode the elephants along the path.
We were taken on a path through an overgrown field with views of the hills all around. The elephants lumbered along, stopping to eat vegetation on the way. 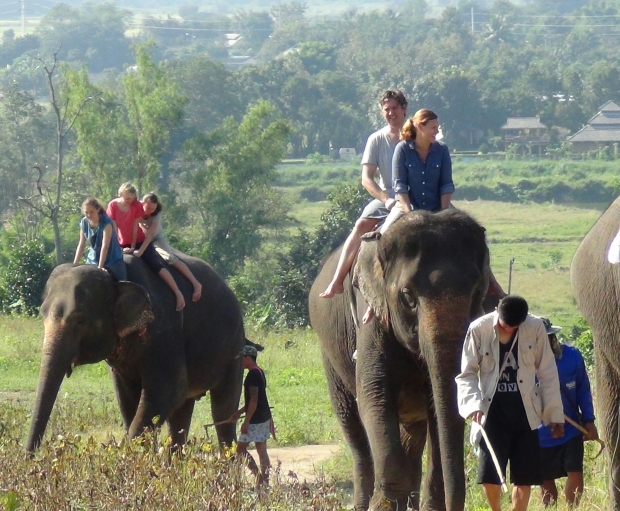 But not our elephants. We wanted the full experience. We had worn our bathing suits under our clothes, so I took my shirt off and tossed it on the ground next to some stuff the mahout was leaving on shore. I left my pants on because elephant skin and hair is very rough. 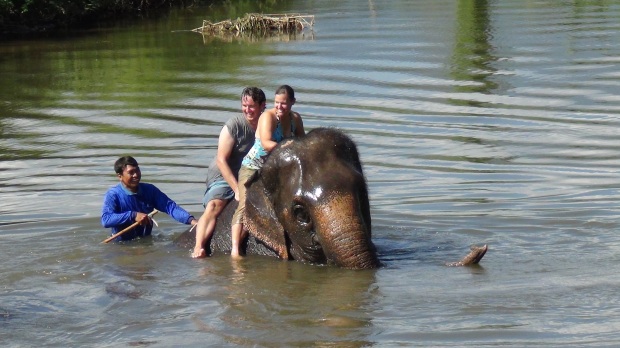 Another command was called. The moment I had been waiting for. I held tight to see if how long I could stay on before being bucked off into the water. Rand was tossed off first (because he wasn’t even trying to stay on). Then seconds later, I was in the water.

We climbed back on and were tossed off again. Then the mahout gestured for us to stand on the elephant’s head and jump off. So we did.

Finally it was time to go. Playing in the water with an elephant was everything I dreamed it would be. Our family had a great time. Only Sierra (the same daughter who was afraid of the swimming monkeys) was a bit scared to be in the water with the elephants.

We rode our elephants to shore. The mahout said a command and our elephant picked up my shirt and handed it to me.

Back at the camp, we fed our elephants bananas. If we said, “thank you,” the elephants would respond back. Also, if you stood next to the trunk, the elephant would give you a hug. Arwen was getting a hug when a nearby mahout called out and the elephant start to pick her up.

Our family had so much fun at Thom’s Elephant Camp. If you ever have a chance to be thrown into the water by an elephant, I highly recommend you do it. 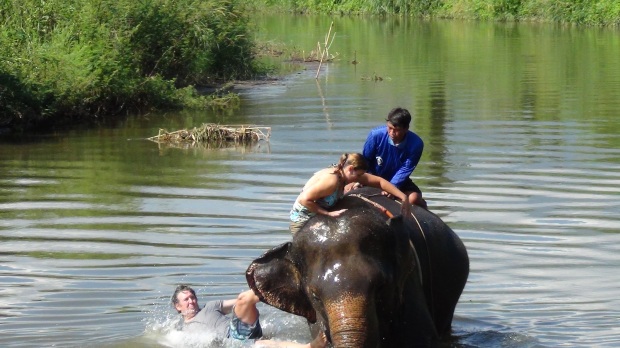 Click here for a video my husband made of our elephant experience.

Dose 1 ✔
I read somewhere that eating pomegranate seeds brings good luck in the new year. Or was it that you have to live in the underworld the same number of months as the number of seeds you eat? Kind of a risk, I guess 😂 #happynewyear #2021
Living far away from extended family for most of my adult life, celebrating with just my immediate family is a pretty normal Thanksgiving. This year we decided to change things up and Rand made curry and biryani for the main meal and I made a last minute decision to make a peanut butter banana cream pie with bananas that came from a tree in our yard to go with sou vide pumpkin pie in a jar for dessert
#vote #bidenharris2020
When asked how she wanted to be remembered, Ruth Bader Ginsburg said, "Someone who used whatever talent she had to do her work to the very best of her ability. And to help repair tears in her society, to make things a little better through the use of whatever ability she has" She did this and so much more. She will continue to be an inspiration for me to work to make a difference whenever, wherever, however I can ❤ #rbg #notoriousrbg
My cat Wheat joined me for yoga this morning. I think her favorite part was shavasana #catyoga