One afternoon as I was sitting on the porch of the house we were staying at in Mae La Oop, I looked across the yard at the family’s raised wooden house and saw the grandmother of the family weaving. The grandmother was from the Karen Hill Tribe and spoke no English or Thai, only Karen. She wore traditional Karen clothing and was weaving a skirt in the tribe’s distinctive striped pattern. She was using a loom she attached to the porch and then to herself as she sat on the floor of the wooden porch.

I thought to myself, I should go watch her weave. When else would I have a chance to experience this cultural art in a real life setting? I felt hesitant at first. I couldn’t talk to her. Would she think it was weird if I sat there watching her?

I summoned up the courage and walked over. I sat quietly for a minute, watching her lean back and forth as she threaded the shuttle through the pattern of strings. Her movements were graceful and precise. I got out my camera and gestured that I would like to take a picture. She nodded. 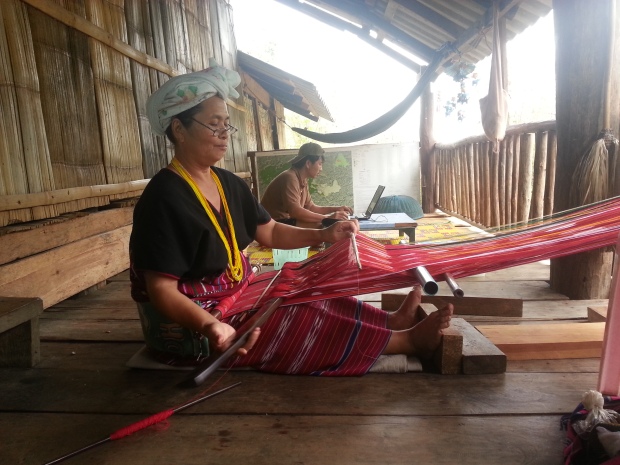 A moment later she motioned for me to come over and try weaving myself. I sat down where she had been sitting and she helped me strap on the back brace. She showed me how to slide the stick wound with red thread through other strings, then tamp it down with a piece of wood that was flat on one side and rounded on the other. When the red thread was sent the other way, this piece of wood would hold the strings up and out of the way. 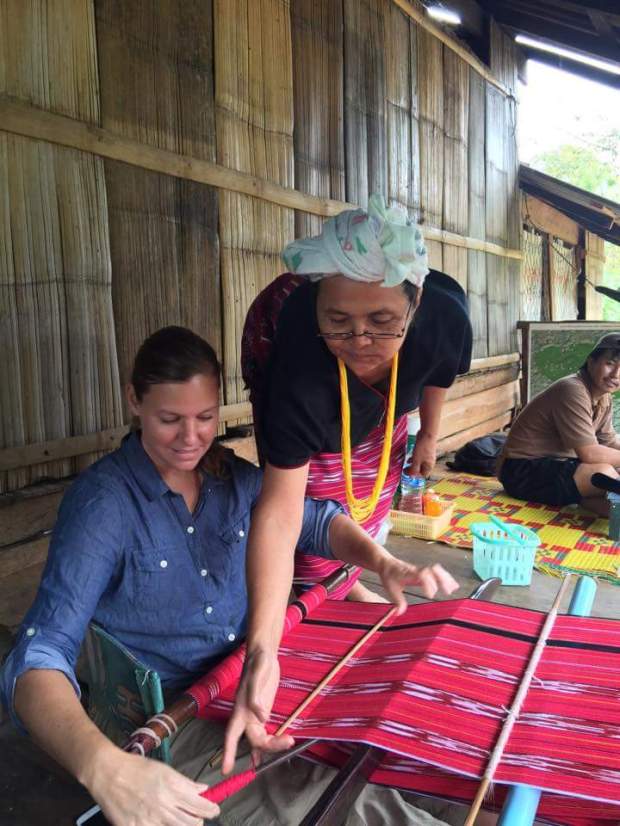 I understood the concept of what I was suppose to do, but in action I was clumsy and awkward. Grandma had to call the Thai speaking student and her son in law over to help translate what I was doing wrong.

I needed to lean forward and back according to when more or less tension was needed on the strings. Grandma made it look easy to send the thread through with the strings in exactly the right place, taking and releasing tension as needed. I was jerky and unsure. Grandma would have to come over and fix it when I sent the thread through the wrong strings.

Eventually, I got the hang of it. I still wasn’t as smooth as Grandma, but the pattern was forming slowly but surely. After about 10 minutes of work, I had completed an inch of the weaved pattern. Then I noticed that there was a small dot of red where it should have been black. If Grandma noticed she didn’t say anything.

I weaved for a few more minutes then turned the loom back over to Grandma.

I am so glad that I took the chance to experience traditional Karen weaving. It gave me insight into the life of these rural people. The slow pace of life was reflected in the time taken to hand weave a skirt. The pride in their culture was shown in the patience needed create the pattern. I was grateful that Grandma not only let me watch her, but also participate in the weaving. Even if somewhere in northern Thailand there is a women wearing a skirt with a spot of red where it should be black.

5 thoughts on “Life in Rural Northen Thailand: Weaving with Grandma”

I’m not a big fan of New Year’s resolutions, but I did make a goal for 2022 to get outside more and take walks when I have free time instead of sitting on the couch scrolling social media. Here’s my documentation of achieving this goal (at least once so far).
I didn’t take a single picture of a human this Christmas, oops!
In case this wasn’t clear #nationalcomingoutday
“There's neither malice nor remorse on the Serengeti”
Standing on the equator 🌞
Game drive in the Masai Mara. Part of the park on the north side of the river is actually in Tanzania, so unexpectedly got to add another country to my count 🙌