When our month long visa was up in Nepal, we weren’t feeling quite ready to go back to the challenges of traveling in India. So what did we do? We went to one of the most intense cities in all of India: Varanasi.

This city, sacred to Hindus, lies on the bank of the Ganges River. Devotees come to bathe in river’s water. Funerals and cremations are held at certain ghats along the shore. It is consider especially auspicious to die on the river bank.

The old city near the ghats is a maze of narrow streets. If it weren’t for Rand’s compass we would have gotten lost every time we left the hotel. Cars aren’t allowed in the old city (they wouldn’t fit anyway). But motorbikes zip through alleys, honking for pedestrians to get out of the way.

Cows roam (and poop) freely in the streets. When moving for a motorbike, you have to be careful not to run into a cow or step in feces. 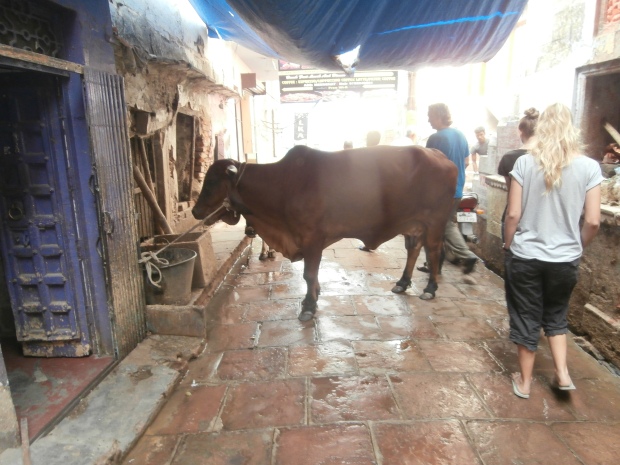 Garbage is everywhere. In most of India, the concept of trash cans has not really caught on. Everyone just throws their rubbish in the street and the garbage collectors sweep it up and take it away once a day. While this can be a bit gross, in other cities, the garbage is generally consolidated in the gutters. In Varanasi the streets are so narrow, it is hard to walk without stepping on trash.

Pretty much all of the negative things you hear about India, you will see in Varanasi. People spitting and farmer blowing. Flies swarming around the garbage and poop in the streets. And locals walking barefoot through it all!

Also in the month of May (when we were there) Varanasi is hot. For the majority of our time in India, Rand scheduled us to avoid overly hot weather. We spent February in the south and worked our way north, leaving Rajasthan in March before the unbearable heat arrived. Then we took refuge in the higher elevation in Nepal in April. But if we wanted to visit Varanasi, we had to do it in the heat of May.

This wouldn’t have been so bad except that the power went out our first night there. So we laid in the 40C ( F) heat with no A/C and no fan, sweating the whole night long.

Varanasi can be difficult, but it is also extremely interesting. Wandering along the ghats, we saw holy men and painted murals.

We took an early morning boat ride and saw people bathing in the Ganges. Some seemed to be performing religious rituals. Others were soaping up and appeared to be taking a bath. And some, especially the kids, just looked like they were having a fun swim.
Also along the river were several cremation ghats. Although we did not see any funerals, we saw the piles of wood and smoke rising from a distance. We also saw a funeral procession on the street one day.

One evening we went to an arti held on the steps of one of the ghats. We arrived too early and were bored by the time it started. We did have fun interacting with some locals boys, who wanted me to take a selfie of them. 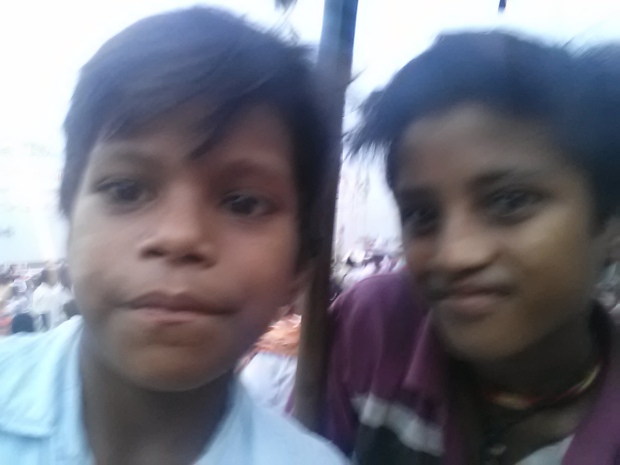 And trying to get a stealth picture of a sadu (holy man). They don’t like you to take their picture unless you pay them, so they cover their eyes if they catch you.

During the arti, butter candles are brought around and Hindus run their hands over the flame and towards themselves in a gesture of a blessing of sorts. There is also sometimes a crumbly white food that is eaten from a bowl. Given the low level of cleanliness in Varanasi, we declined to eat any when it was offered to us.

Then there was chanting. Lots of chanting. After about 10 minutes, we decided we had heard enough of the chanting (the arti was suppose to last an hour), so we made our way back to the hotel where, thankfully, the A/C was now working.

Varanasi may be difficult, with its dirty, crowded, narrow streets, but it is worth the hassle for a couple of days to see the intriguing rituals of the Hindu culture. 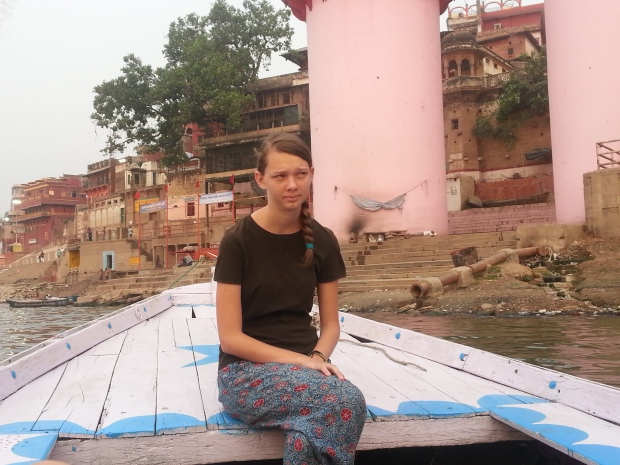 Varanasi: Difficult, but worth it?