Rishikesh, India is known as the Yoga Capital of the World. You would think that we would have immediately felt the zen of the place when we arrived, but you would be wrong. Our first day in the small mountain town was one of the most stressful of the whole trip.

The open air taxi dropped us off on the side of the road and we set off looking for a place to sleep for the night. The main areas of the town center on the two bridges crossing the Ganges River, Laxman Julha and Ram Julha. We had been let off near Laxman Juhla.

We found a guesthouse close to where we had been dropped off that seemed fine in terms of price and quality, but wanted to check some other places first. When we came back a few minutes later to say we would like to stay, we were told there was only one room available (we usually book two double rooms). Um, Ok . . . So the search continued.

We found ourselves winding down a small street, shops selling gaudy jewelry and bangles on every side, flies swarming in the air, but no hotels. At the bottom of the hill, we stopped in some guesthouses, but everywhere was full, or overpriced, or had poor conditions.

We were tired and sweaty and sick of carrying our packs. We thought about having the girls and I wait at a cafe with the packs while Rand ran around looking, but as Rand and I became increasingly frustrated, we ended up crossing the Laxman Juhla bridge. We asked at a couple places that were full.

Out of patience, Rand suggested we go back across the bridge to a cheap place we had looked at before. I did not want to go back up the hill, but I was also sick of searching. I slowly trudged up the steep hill, my pack pressing against my sweaty back. Sierra was practically in tears as she wobbled up the alley stairs and almost fell over (over dramatic and lacking in stamina, our lodging search had been too much for her).

Crest Guesthouse had hard beds, cold showers, no wifi, and splatter-covered walls that looked like a crime had been committed in the rooms. Rand and I agreed that we would only stay here one night.

Later that afternoon Rand and I crossed Laxman Juhla again. This time we found bunches of guesthouses, but most were full or told us to come back the next morning to find out if they had rooms available. Apparently we had come to Rishikesh just a week after the International Yoga Festival and the town was still packed.

At this point, we were seriously considering leaving Rishikesh. We had planned to chill out here for two weeks, but so far the town was anything, but relaxing for us.

Rand and I gave it one more try the next morning. We crossed Laxman Juhla once more. Tucked into a side alley, we found a family sized room with two double beds and a twin mattress on the floor. It even had a sitting area. It seemed like we might find some relaxation in Rishikesh after all.

We got into a routine of getting chocolate croissants for breakfast and eating them down by the banks of the Ganges. 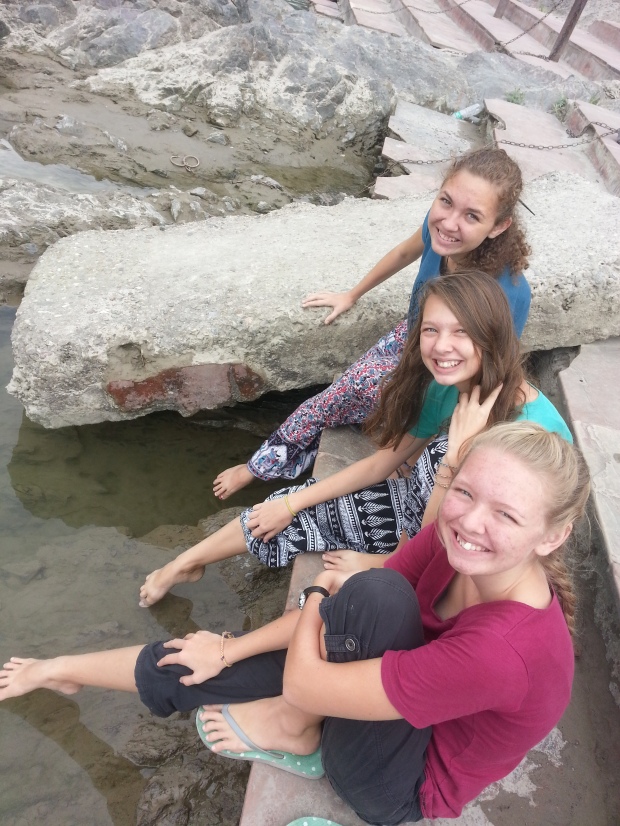 The girls dipping their toes in the Ganges River

I went to a yoga class almost every day.

We explored the Swarg Ashram by Ram Juhla.

We ate momos (a Tibetan version of steamed or fried dumplings) and pasta and sizzlers (don’t ask) at the many restaurants on the single street on the far side of Laxman Juhla.

We window shopped at the many little stores that lined the same street and the girls and I finally gave in and bought bunches of Tibetan jewelry. We couldn’t resist the earrings, bangles, and toerings.

We people watched, observing the gurus with their long hair and loin cloths, and the foreign visitors in their uniform of baggy pants, flowing shirts and scarves.

Rand played the Beatles’ “White” Album and we imagined John, Paul, George, and Ringo drawing inspiration from this mountain town and its chilled out vibe.

When we got tired of relaxing, we went white water rafting down the Ganges River, a short trip with some fun little rapids at a very reasonable price (450 rupees or about 7 US dollars per person ).

And we got to celebrate Holi in this laid back town. But the story of how much fun that was deserves its own post.

We almost gave up on Rishikesh, but I’m glad we didn’t. After 9 months of travel, two weeks in the capital of zen was just what we needed. 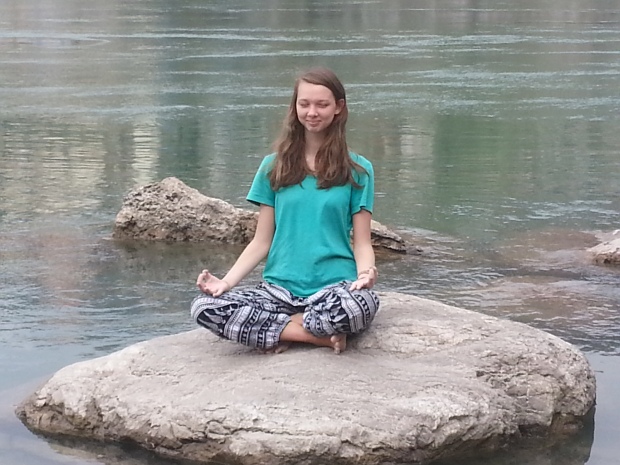