Everything I knew about slums in Mumbai I learned from watching Slumdog Millionaire.

I expected tin roofed shacks patched together in a maze. I thought I wouldn’t be able to avoid stepping a piles of garbage and feces.

As I crossed the pedestrian bridge, I could see over the roof tops of the Dharavai Slum. Instead of shacks, I walked down into a rows of shops not so different from what I had seen all over India. The level of garbage and feces was similar to the rest of Mumbai (some, but easy to avoid stepping in).

We were on a guided tour of Dharavi with Reality Tours, a nonprofit organization that leads tours around the slums and uses the proceeds to improve the community.

We turned away from the shops and entered the industry zone. I tiptoed through the wet alleys. Each doorway revealed people doing work. Some were sewing textiles. Others were sorting plastics.

In one doorway, a man and his son were selling bread. The son watched youtube videos on his phone. My oldest daughter expressed jealousy over the quality of the boy’s phone and its ability to stream videos. Then we realized how strange it was to feel envy for someone living in a slum.

We were led up a ladder to the roof of a building to see the plastics drying on top of the nearby buildings. The flat roofs contained piles of colorful plastic bottles and shards of bleached plastics spread out in a thin layer to dry.

Recycling is one of the biggest industries in the slums. All kinds of plastic bottles and scraps are collected, often by young boys. The plastics are dried, melted into pellets, sorted by hand, and sent to recycling plants to be made into something new. My youngest daughter was especially impressed that the recycling workers could sort the plastics pellets by touch without even looking at them.

Our guide wanted us to understand that the people in Dharavi are not lazy, poor people, but hard workers trying to provide for their families. The work conditions, however, are harsh. Long hours, no safety standards, noxious fumes.

I could hardly breathe as we walked past a paint can recycling shop. I could not imagine being around that smell all day long.

The industry zone gave way to the Muslim residential quarter. We weaved through alleys lined with doorways to people’s homes. Many doorways were covered with a curtain for privacy, but some were left open and gave a view of women sitting on the floor, washing laundry in a bucket or preparing food. 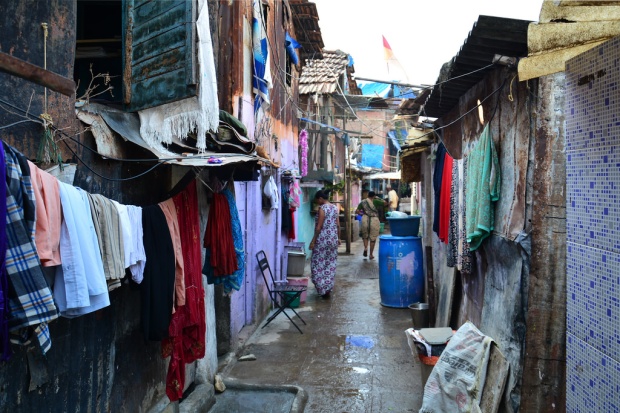 Children in dingy clothes ran through the alleys into an open lot piled with gravel and garbage. A backhoe sat unmoving in the center of the lot. The children smiled and waved as we passed and then returned to their games.

The alleys grew increasing smaller. Eventually there was hardly enough room to walk single file. Entering the homes would not relieve any claustrophobia since they consisted of only one or two rooms shared by an entire family.

Our guide pointed out that despite these poor conditions, many people chose to stay in the slums even after achieving a measure of financial success because of the close community ties.

The Hindu neighborhood had wider alleys and more colorful houses. In fact, the conditions here didn’t seem much worse than many other non-slums areas we have visited in India.

The difference between the Muslim and Hindu neighborhoods, our guide informed us, was due to the fact that Hindu women are allowed to work and the Muslim women are not. This was evidenced by the rows of weaved baskets covered in drying chapati. The women would make and sell this Indian flat bread. Other women made and sold textiles or pottery.

The tour was designed to give a positive view of the slums while highlighting the difficult conditions. Just when I was starting to think that maybe living in the slums was not much worse than some other places in India, I was reminded that the slums have no indoor plumbing and the conditions of the public toilets are pretty horrible.

Also, Dharavi is a legal slum and therefore has more infrastructure. The illegal slums are rougher and less developed, more like the tin-roofed shacks I pictured before visiting Dharavi.

After the tour of the Dharavi slum, I couldn’t believe I was thinking this slum was “not that bad” compared to other living conditions in India. Yet, it was true.

When it was time to leave the slum, we climbed into a shared taxi. As we pulled away, the driver blasted Bollywood music, giving me a soundtrack to ponder all that I had seen that day.

With thumping sounds blasted from the speakers, I looked out the window and saw blue tarps propped up on the sidewalks with families huddled underneath them.

Here I had come to Dharavi to see how the poor in Mumbai lived, but now I was seeing people in such abject poverty that they would be grateful to live in one room in claustrophobic alleys with access to a public toilet.

I knew poverty was a problem in India, but now I was seeing the many variations from really poor to destitute with my own eyes. I felt helpless knowing that my donation of a few thousand rupees to Reality Tours would hardly make any difference in the lives of the people living in the slum. And wouldn’t make any difference to the families living on the sidewalks.

The problem of poverty in India is enormous and heartbreaking. It is frustrating to see people with such a low standard living while others, including myself, live in such comfort. Even though the boy in the bread shop had a better phone than my daughters, I know they wouldn’t trade their hot showers, flush toilets, soft beds, and spacious home for a small piece of electronics.

I would like to say that I came away from visiting the slums with a plan to do more to help those in poverty. But the truth is, I am not sure what to do. The problem seems overwhelming.

Seeing the often smiling faces of those living in poverty, however, has made me more determined to figure out what can be done give them a better life.

If you would like to learn more about the slums in Mumbai, I recommend Katherine Boo’s Behind the Beautiful Forevers, a poignant story of the families living in the Annawadi slum near the Mumbai airport.