If you had asked me, in which country will you find a cousin you have never met before? I never would have guessed India.

Shortly after beginning our year long round the world trip, I received a facebook friend request. I wasn’t exactly sure who the person was, so I let it sit there for about a week. I finally decided that it was someone I knew from high school and I accepted the request.

After seeing of few of her posts, I realized it wasn’t the girl from high school, but perhaps someone I was related to. So I asked my dad.

“She is from your grandpa’s sister’s side of the family and she wants to follow your travels,” he told me.

Six months later, just days before our flight to India. my cousin posted that she was getting ready to travel to India.

I commented on her post and we began messaging one another.

She was arriving in Dehli and we were flying into southern India at Madurai. It didn’t seem likely that we would be able to meet.
But her plans were fluid, so she came to south to Kochi and made plans to take a bus to Allepey to see us.

Now to find a meeting place. Where exactly would we find each other in a town in a foreign country neither of us had been before?

We were planning to go the houseboat dock that morning to book a boat for the follow day, so I suggested we meet there.

After booking our boat, we waited. We tried sitting in an obvious place. We took turns walking around the area looking for a blonde women (who should have been easy to spot in a sea of dark haired locals). An hour after our meeting time, we gave up waiting. Rand said it as crazy to even think that meeting someone you had never met before in India would be possible.

But I wasn’t ready to completely give up, yet, so I suggested we go to a restaurant with wifi where I could at least message my cousin and let her know I was sorry we hadn’t found each other.

She didn’t have data on her phone, but she knew what guesthouse we were staying at. After giving up on finding us at a different boat dock, she found a guy with a motorbike to take her to our guesthouse. We weren’t there, of course, but she met another guest and asked for the wifi password. She saw my message, which told her what restaurant we were at.

Just as we were getting ready to leave the restaurant, I got her message. My cousin was on her way to the restaurant. Maybe meeting a long lost cousin in India wasn’t such a crazy idea after all.

After making introductions, we went down to the canal and chartered a motorboat to take us on a 3 hour tour of the Kerala backwaters. 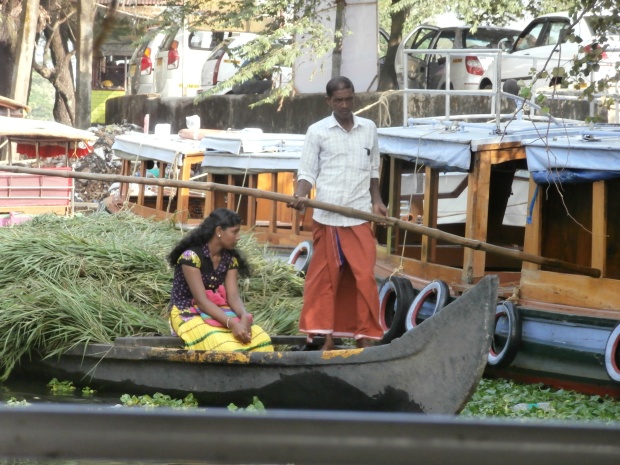 As we floated along the palm tree lined canals, my cousin and I figured out how we were related (her dad and my dad are first cousins), told family stories, compared travel tales, and chatted about life in general. 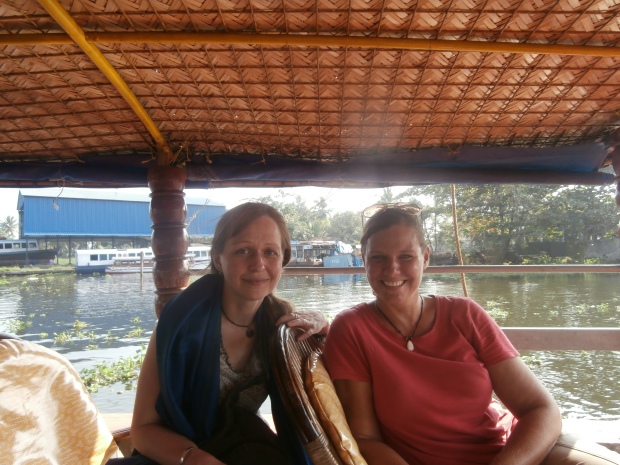 We had a great time getting to know each other and enjoying the scenery. We even got to play with a tame eagle. 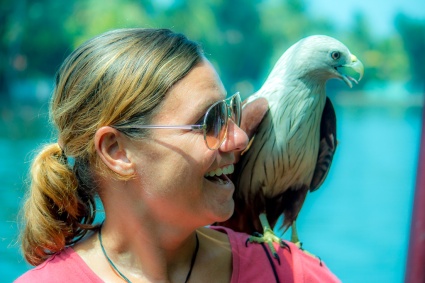 When traveling, you get to meet all kinds of people. Sometimes, even someone you are related to, in a country you would never expect.