There’s not much going on in Thailand’s border town of Chiang Khong. We had just entered from Laos and were planning to stay a few days, thinking we could use the town as a base for exploring the Golden Triangle region where Thailand, Laos, and Myanmar meet.

It turns out you cannot arrange travel to the Golden Triangle area from Chiang Khong. Well, maybe you can, but it is not easy. We asked around and mostly people laughed at our request. We were told it might be possible to get a songtheow (public transportation truck) from the post office, but we never saw any.

After a month in Laos where the only street food was sandwiches and crepes made for tourists, we were looking forward to getting back to local Thai street food. But we couldn’t find any in Chiang Khong. This made no sense to us since we had never been to a Thai city without street food.

We did find a delicious Mexican restaurant though. Weird, right? During the day the place serves sandwiches with homemade bread, which were pretty good, but for dinner there is a full Mexican menu. Apparently the owner learned how to cook Mexican food from a traveler that was passing though. 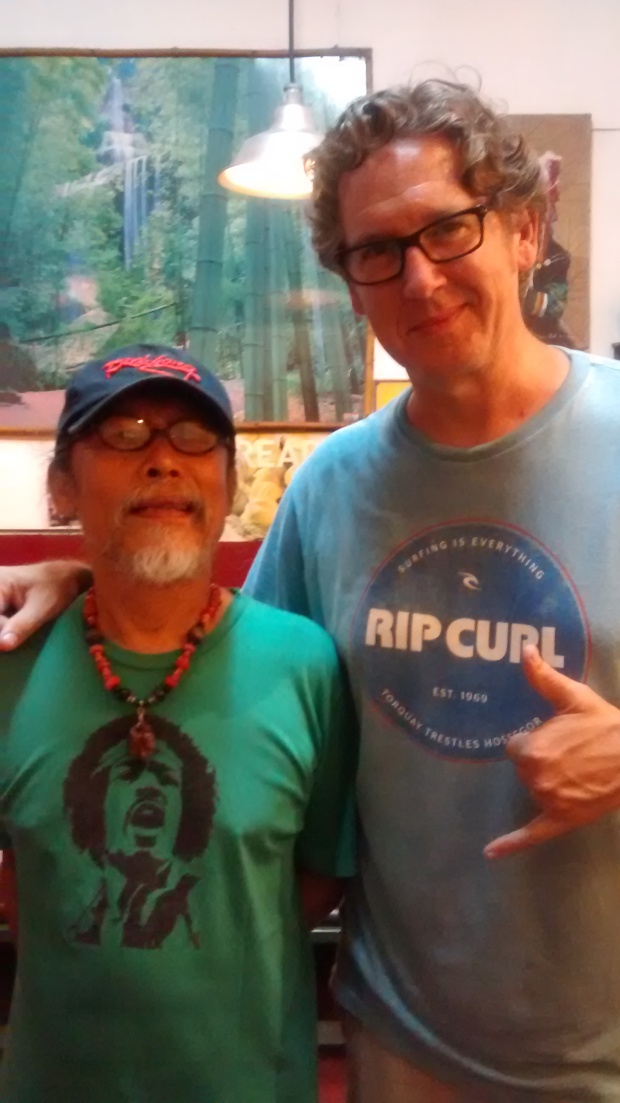 Rand with the owner of the Mexican restaurant in Chiang Khong

The food was really good and a welcome break from the Asian dishes and fried western food that had been our diet through most of Laos. It is interesting that most ingredients in Mexican food can be found in a local Thai market. The two cuisines have a lot of flavors in common. The major difference is that Mexican food has cheese. Sierra had been missing cheese and was very excited about this meal.

We stayed at Chiang Khong River View Hotel. It was right on the Mekong river. Rand and I got a corner room on the third floor with two walls of windows, giving us a lovely view. The girl’s room next door had only 2 twin beds while we had a large double bed, so we probably should have traded with them, but we didn’t want to give up our view.

Would you give up this view?

During the day we could look out over the Mekong river. And at night, we could look across the river towards Laos and see lanterns still being let off into the sky from the Loy Kratong festivities.

Our guesthouse owner informed us that the local monks would be collecting merit along the riverfront on our last morning in Chiang Khong.

We thought about going down to watch, but then realized we would have a great view from our windows.

We peeked out the window that morning and saw locals lining up along the road with tables full of food for the monks. Before long a procession of monks in saffron robes began making their way down the street.

Our birds eye view was perfect for taking pictures of the locals making merit and the monks chanting their blessings.

One fascinating aspect of this merit making was that it appeared that poor locals (mostly men and boys) were following along with empty bags, hoping the monks would give them their excess. It happened to be October 31st and we said it was Buddhist trick or treating. 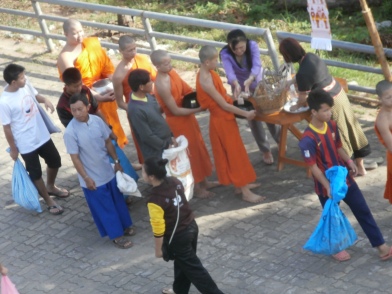 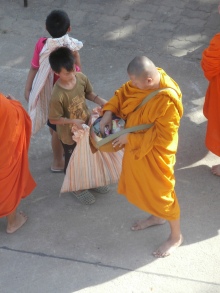 While I can’t recommend Chiang Kong as a great destination, it’s not a bad place to stop over on the way to or from Laos.

One thought on “The Border Town of Chiang Khong”

Dose 1 ✔
I read somewhere that eating pomegranate seeds brings good luck in the new year. Or was it that you have to live in the underworld the same number of months as the number of seeds you eat? Kind of a risk, I guess 😂 #happynewyear #2021
Living far away from extended family for most of my adult life, celebrating with just my immediate family is a pretty normal Thanksgiving. This year we decided to change things up and Rand made curry and biryani for the main meal and I made a last minute decision to make a peanut butter banana cream pie with bananas that came from a tree in our yard to go with sou vide pumpkin pie in a jar for dessert
#vote #bidenharris2020
When asked how she wanted to be remembered, Ruth Bader Ginsburg said, "Someone who used whatever talent she had to do her work to the very best of her ability. And to help repair tears in her society, to make things a little better through the use of whatever ability she has" She did this and so much more. She will continue to be an inspiration for me to work to make a difference whenever, wherever, however I can ❤ #rbg #notoriousrbg
My cat Wheat joined me for yoga this morning. I think her favorite part was shavasana #catyoga