After 6 weeks in Bangkok, we were ready to get away to somewhere quiet and peaceful. Several days in a hammock by a river is just what we needed. So we made our way to Si Phan Don, Laos. Also called the Four Thousand Islands, this area in southern Laos is the perfect place to do a whole lot of nothing.

We took an overnight train from Bangkok to Ubon Ratchatani, Thailand. We then took a bus across the border to Pakse, Laos.

In Pakse the bus stations have been moved 5 kilometers out of the town centers, so that tuk tuk drivers can gouge tourists – ugh! We thought we had agreed on a price of 100 baht for all five of us (we hadn’t changed money and the driver was OK taking baht since Pakse is near the border). But when we arrived in town, he wanted 100 baht per person, which is way more than we would have paid for the same ride in Thailand. Rand argued with the driver a bit and ended up paying the driver 300 baht.

We stayed the night in Pakse and took a minibus and boat 65,000 kip (about 8 USD)/person to the island of Don Khon the next day.

We hadn’t booked a room ahead of time, but it was low season so we had no trouble finding a place to stay. We got off the boat and walked up the main road. It was basically a dirt path along the river with shops, restaurants, and guesthouses lining each side.

The second place we inquired at (Somphamit Guesthouse) had two rooms, right on the river, with hammocks on the porch, in our price range, 200,000 kip (25 USD)  for a double and a triple – Sold!

And so for 5 days we hung out by the river, laying in hammocks, watching the river flow by and doing not much. 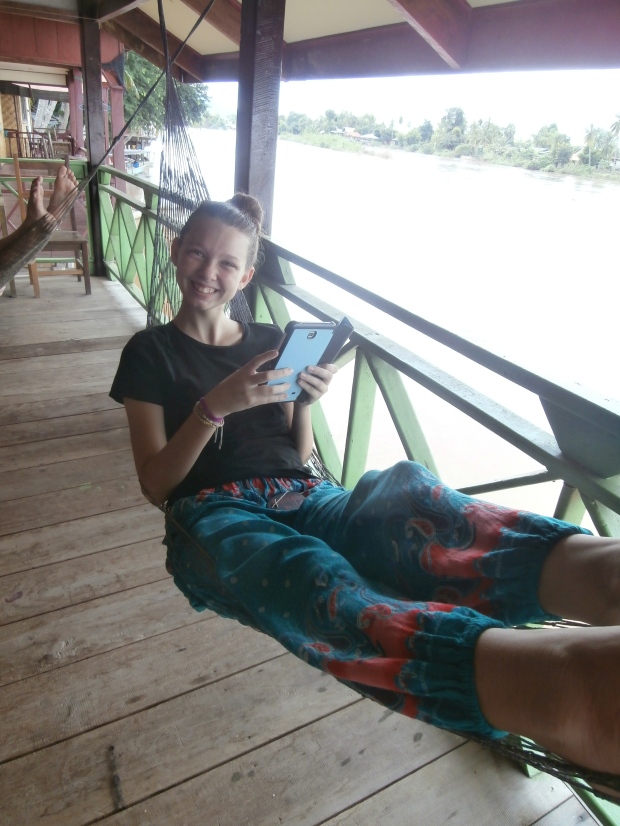 Everyday a boatman would ask us if we wanted to go to the waterfall. And everyday we told him, no thanks.

The restaurants lining the dirt road were all about the same. Baguette sandwiches, fried western food, and watered down Thai food. The fried rice and noodles weren’t bad. But the curries were pretty bland. We ordered french fries with almost every meal. After 3 months of mostly Asian foods, french fries fed our western food cravings.

Our favorites of the “same, same, but different” restaurants were Pan’s Guesthouse and a place on the river set back from the road and through a large gate. 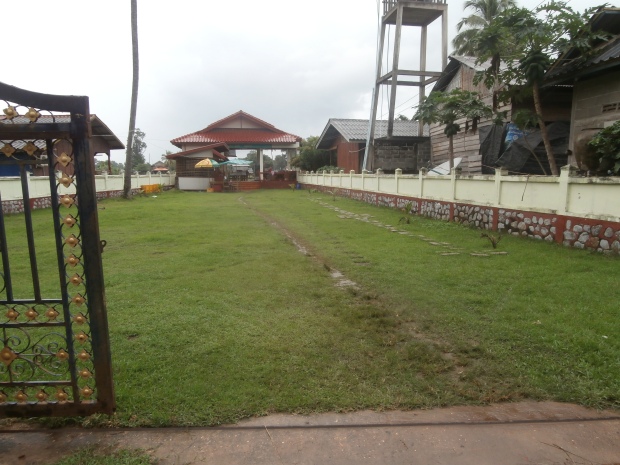 One of our favorite restaurants on Don Khon

We knew it was low season, but it often felt like we were the only travelers in the little village. Several times when we approached the gate to the restaurant by the river and paused to see if it was open, the owner would rush over from across the street and usher us in. We always had the place to ourselves.

We loved sitting on mats around a low table, looking out over the river, almost as much as we enjoyed naming all of the restaurant pets.

The first cat that approached us became “Cola.” The second was “Sprite.” The emaciated dog was, of course, “Bones.” 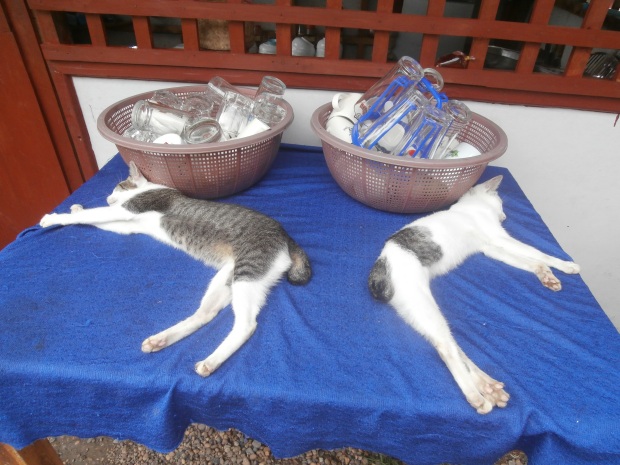 Keeping with the beverage theme, another dog, the same breed as Bones, but not as skinny (actually all of the dog on the island were interestingly, but not surprisingly, the same breed) was called “Fanta” and the puppy at the restaurant down the road was “Milo.” (after the chocolate malt drink)

So aside from an interesting walk, which I will write about later, that was our experience on Don Khon: hammocks, french fries, and naming random animals. Not a bad way to spend 5 days.

Bones and Cola chilling out

One thought on “Lazy Days on Don Khon”

Wedding dress shopping was a success. Whew!
I started a new teaching gig this semester. The downside is the 40 drive each way for a 75 minute class. The upside is this is what the drive looks like 🌊
Had to start getting out a second mat because my cat has decided that she also needs to be on a yoga mat every morning 🐈‍⬛🧘‍♀️#catyoga #yogacat
I’m not a big fan of New Year’s resolutions, but I did make a goal for 2022 to get outside more and take walks when I have free time instead of sitting on the couch scrolling social media. Here’s my documentation of achieving this goal (at least once so far).
I didn’t take a single picture of a human this Christmas, oops!
In case this wasn’t clear #nationalcomingoutday