Our favorite part of the day in Mae La Oop was the evenings. After teaching English in the morning, we would relax on our mats in the main house. At 6pm Oon, the nine year old daughter in our homestay family, would walk in and announce, “Dinner time” in accented English.

Our first night there, Oon tried to speak to us in Thai. Rand attempted to tell her in Thai that he doesn’t speak Thai, but instead asked her if she spoke Thai. She paused and gave him a look that a tween from any culture would when asked a ridiculous question and said, “…yes.” After this, she always called us for dinner in English.

After the announcement, we would make our way over to the raised wooden house where a meal was set up for us on the porch.

A mat was spread over the floor with a short table set upon it. A small feast laid upon the table.

Sometimes there would be noodles. Sometimes what we called “notdogs,” a Thai version of something like a hotdog, but not exactly. Often there would be fresh fruit recently picked from wild trees that grew around the village. Dragon fruit. Mango. Loganberries. And always rice.

We would sit on the floor around the table enjoying the meal. We laughed as the conversation inevitably turned to bathroom topics and hoped that our hosts, who were eating their own dinner on the opposite side of the wall inside the house, wouldn’t understand our English well enough to figure out what we were talking about.

In the yard, the family dog, who wasn’t really the family dog, just a dog who hung about and killed vermin, would entertain us with its scratching. The poor thing, who we called The Hyena, had a skin condition and would spin around on one hind leg while scratching its butt with the other.

Sometimes the other “family dog” who we called Ribsy, for obvious reasons, would be sniffing around the yard for scraps of food that it seemed he rarely found. 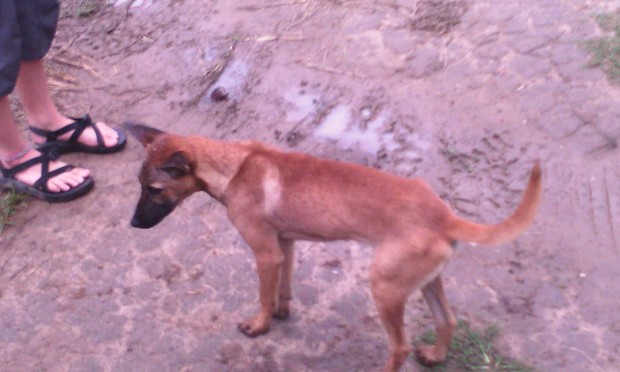 After the meal we would open packets of our new favorite beverage, Milo, a malted chocolate drink that we had for the first time in Malaysia. We mixed the powder with the hot water from the thermos that had been set out for us and sipped the warm, delicious liquid while looking out over the rice fields and mountains that spread out before us. On days when we decided to forgo our evening drink, Grandma would call us back and insist, “Milo, Milo.”

Often after dinner, we would find the baby of the family playing the doorway. If she would let us, we would scoop her up and play with her on the porch while the family finished their meal. The family thought we were doing them a favor, but of course, we loved any opportunity to play with this adorable little girl.

Later in the evening the students would come over and hang out on the porch of the big house. We liked to think they came over to spend time with us, but really it was to eek out the smidge of wifi that came from the hospital next door. Still, we enjoyed hanging out with them.

Holding their phones towards the hospital attempting to get a better wifi signal.

Then our host and the children would come over for English class. Rand sat on the porch with the host, practicing English, while the girls and I played games inside with the kids. We fought over who got the Thai speaking student to help us when we couldn’t get our students to understand what we were trying to say.

By 9 pm, most everyone in the village was heading to bed. They would be up by 5 am the next morning. We didn’t quite adapt to their “early to bed, early to rise” mentality, but we were usually in bed by 10 pm, which was early for a night owl like me.

I would lay on the floor on mat with a comforter folded underneath me for extra cushioning and a tiny pillow under my head. Despite the extra padding I would still wake up several times a night with an aching hip or back or shoulder. Still as I laid there before going to sleep, I felt relaxed.

Outside a symphony of frogs sang me a lullaby. A very loud lullaby. Sometimes I thought Sebastian from The Little Mermaid would appear to conduct the frog orchestra. He never did, but music played on through the night. It was loud, but somehow peaceful. I would drift off to sleep to the song of the frogs. I would miss it when the time came for us to leave Mae La Oop.