The moment I stepped out of the train station in Kuala Lumpur (KL) set the stage for the rest of our visit in that city. In that moment, I stepped in poop. And not just any poop. A gloopy pile that splashed onto my other foot.

We arrived in KL at noon after taking a bus from Melaka and Kommuter KMT train from the bus station. With the full sun beating down on me, a heavy backpack weighing me down, and poop on my shoe, I began the twenty minute walk to our Chinatown guesthouse.

Rand led the way with walking directions loaded onto Google maps. I followed, scuffing my feet as I walked trying to rub the poo off my shoes. I think the only thing that succeeded in doing was causing the poop smell to waft up to my nose more frequently.

It seemed to take forever to get to our guesthouse (It turned out Goggle maps took us the long way from the train station). We walked and walked in the noon day sun with sweat dripping down our backs, an intermittent poo smell bombarding us (and not always from my shoe), trying not to trip on the cracks in the broken sidewalks or get run over by cars, buses, and motorbikes. For some reason Malaysians are not fans of crosswalks or slowing down for pedestrians.

We made it alive to our guesthouse where I tried to discreetly rub the poo off my shoes with the door mat. That, unfortunately, only resulted in stinking up the whole lobby (Sorry Raizzy’s Guesthouse!). Even though Rand had confirmed our booking for 5 people, we were told that it would cost an extra $10 for the extra bed for the fifth person.

We got to the room and found a double bed, twin bunk beds and a mattress on the floor plus enough floor space for the five of us to stand in a small circle looking at each other. Between the lack of space and large number of “dirtbag backpackers” we would have to share a bathroom with, we decided to look for another place for our next two nights in KL.

Note: Chacos are great, albeit ugly, travel shoes, but are awful if you step in poop while wearing them. It took much forceful shower spray on them to get the poo out of their deep traction.

So our first hour in KL wasn’t great, but it didn’t get any better from there.

When we travel, our favorite things to do are eat the local food and wander around to get a feel for the place. KL is not so much a wandering around type of city. Between its distain for crosswalks and a freeway and train tracks in the middle of the city, it is almost impossible to get around KL on foot.

That wouldn’t have been so bad if the public transportation had been able to get us where we wanted to go. We have navigated lots of cities’ transportation. New York City subway, no problem. Bangkok’s skytrain, metro, and Chao Phraya boats, got it. Singapore’s buses, easy (with the help of Google maps). In KL, there is a light rail, a monorail, a commuter train, and free and paid buses. None of which seem to go where we wanted to go.

Everyday day we spent in KL involved some sort of transportation or other mishap.

Our first night in KL, we tried to go to the National Mosque. But none of the public transportation options went there, so we followed Google Maps walking directions until we hit the train station and discovered that we would have to walk twenty minutes out of our way to get around the tracks, meaning we wouldn’t make it there in time for the evening call for prayer, so we gave up.

On our second night in KL, after returning from Borneo late in the evening, the train station exit closest to our hotel was closed. This meant an extra 30 minute walk with our packs when we were hot, tired, and hungry.

The third day in KL we decided to make the trek to the National Mosque only to find out that it had closed 5 minutes earlier and wouldn’t open again for 4 hours. 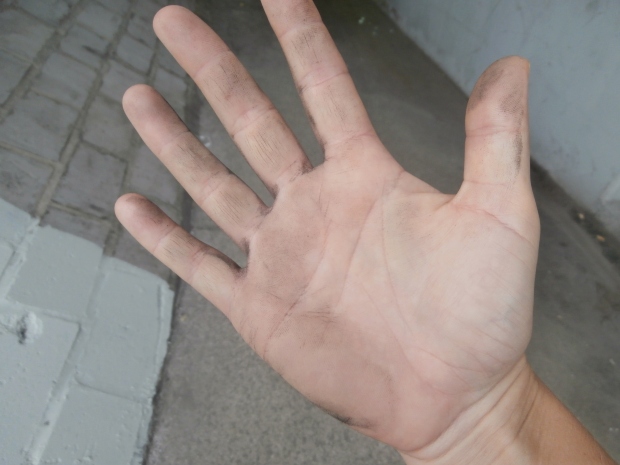 Needless to say our time in KL did not leave us fans of the city. But we did have some good experiences.

Highlights in an otherwise terrible city

1. Arriving at Masjid Jamek (Friday Mosque) just as the call to prayer began and watching a man sitting on the concrete block next to us break his Ramadan fast as the sun set behind the mosque. 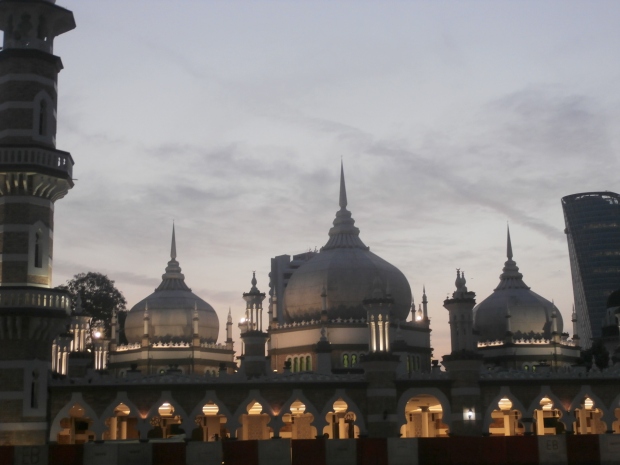 2. All five of us sitting on the tiny floor space in Raizzly’s Guesthouse eating Indian curry and rice off of a banana leaf.

3. The best steamed buns in a little shop next door to our second hotel (Tropic City Hotel). Their BBQ pork buns were amazing.

4. Literally chilling out (it is just way too hot in southeast Asia to be outside in the afternoon) in the mall food court, killing time before our night train to Butterworth. Why are Asian food courts so much better than American food courts?

5. Being the only white people in the Indian restaurant in Brickfields, gorging ourselves on roti and curry.

6. The Pertronas Towers. These skyscrapers are just cool. We enjoyed our final evening in KL hanging out under these massive buildings of steel and light, taking pictures and watching everyone around us taking selfies. We even figured out how to take the free hop on hop off bus to get there, so we weren’t frustrated trying to get there. 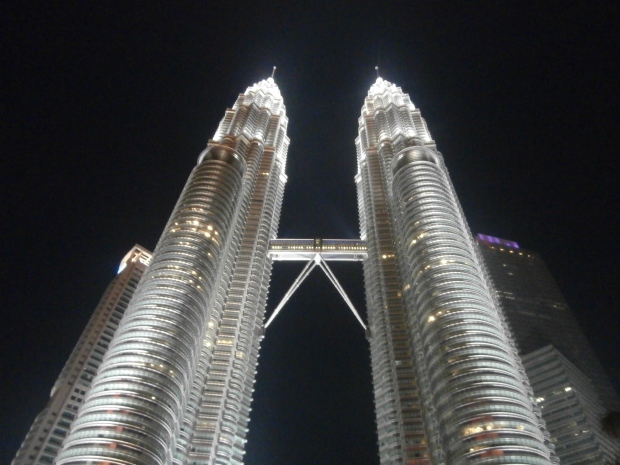 So it wasn’t all bad. I have read other travelers’ blogs who have loved KL. We didn’t love it. To be fair, we didn’t go to many of KL’s top attractions:  The Islamic Art Museum, the Bird Park, KLCC park. And we did chose to stay budget guesthouses away from the glitzy part of the city.

Plus, we opted not to use taxis when we couldn’t figure out the public transportation and found walking around to be somewhat treacherous. Our budget was shot from Borneo and we weren’t sure five people would be allowed into one cab. 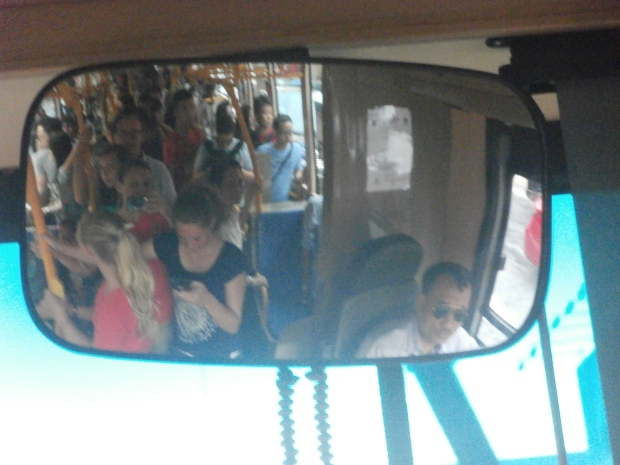 Standing room only on the free hop-on/hop-off bus

KL is definitely a difficult city to get around, but the Indian food is good, the Muslim influence is fascinating, and the Petronas Towers are dang impressive.

3 thoughts on “How Not to Get Around Kuala Lumpur”

Wedding dress shopping was a success. Whew!
I started a new teaching gig this semester. The downside is the 40 drive each way for a 75 minute class. The upside is this is what the drive looks like 🌊
Had to start getting out a second mat because my cat has decided that she also needs to be on a yoga mat every morning 🐈‍⬛🧘‍♀️#catyoga #yogacat
I’m not a big fan of New Year’s resolutions, but I did make a goal for 2022 to get outside more and take walks when I have free time instead of sitting on the couch scrolling social media. Here’s my documentation of achieving this goal (at least once so far).
I didn’t take a single picture of a human this Christmas, oops!
In case this wasn’t clear #nationalcomingoutday